Department of OB-GYN: Chair accepts "Physician of the Year" award at HMA gala 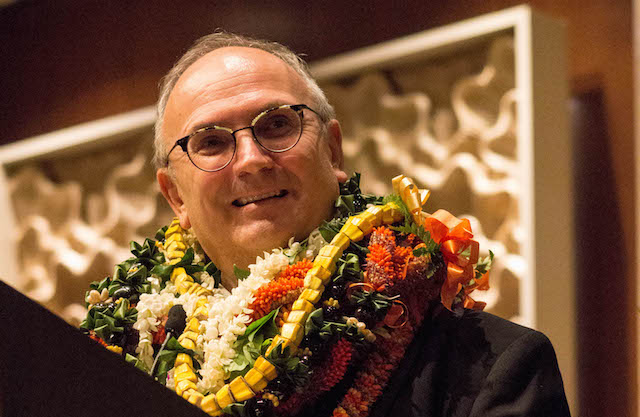 Dr. Ivica Zalud, the Kosasa Endowed Chair in the Department of Obstetrics, Gynecology and Women’s Health at the University of Hawaiʻi medical school, received the congratulations of a ballroom filled with his peers as he accepted the Hawaiʻi Medical Association’s 2017 “Physician of the Year” award on October 6.

In his acceptance speech, Dr. Zalud politely renamed the award, noting that he sees it as an honor for “Physicians of the Year” (plural), to include all other doctors who work for better healthcare in Hawaiʻi. Dr. Zalud mentioned the dedicated faculty MDs who work in his department at the University of Hawai’i John A. Burns School of Medicine (JABSOM), and other physicians who, like him, were being honored for their service to Hawai’i.

Dr. Zalud ended his talk with a phrase adopted by his department, using the words of Queen Kapi‘olani: “Kulia Ika Nu‘u” (Strive for the highest).” Queen Kapʻiolani founded what is now the Kapiʻolani Medical Center for Women and Children in 1890. The JABSOM OB-GYN administrative offices are located there, and in cooperation with Kapʻiolani Medical Center, the department trains future OB-GYN physicians on its grounds.

About the Department of Obstetrics, Gynecology and Women’s Health
JABSOM faculty in OB-GYN serve families statewide. They are involved in about one-third of the annual births in the Islands, especially those involving critical care needs or children born into underprivileged families. In addition to regularly providing care for mothers and women at Kapʻiolani, the department also serves underserved families in Wai‘anae, Kalihi-Palama, Waimanalo, Lana‘i and Hilo. OB-GYN faculty treat patients on Kaua‘i and Maui, too, and they represent the only clinical practice with whole spectrum of integrated clinical care in women’s health
(general OB/GYN, maternal-fetal medicine, gynecologic oncology, urogynecology, reproductive endocrinology and infertility, family planning, critical care, addiction medicine and imaging). OB-GYN also has various safety and quality initiatives with other Hawai‘i Pacific Health medical centers and The Queen’s Medical Center.

In 2016, Dr. Zalud was the first physician in Hawaiʻi elected to become a fellow of the American Gynecologic and Obstetrical Society (AGOS).