Dr. Blanchette honored at Cancer Center, is returning to JABSOM 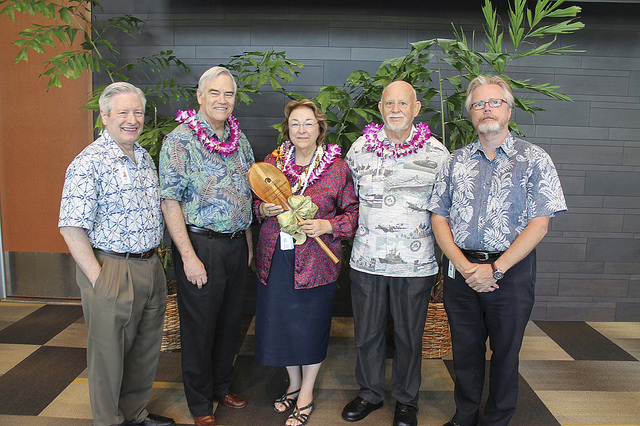 April 21, 2016 — Dr. Patricia Blanchette is transitioning out of her current position at the UH Cancer Center to return to the John A. Burns School of Medicine, this time as Interim Associate Dean for Academic Affairs. In that role she will focus on the coordination of an outstanding team of people who are working on preparing for the School’s reaccreditation. Dr. Blanchette also will return to University Health Partners of Hawai‘i (formerly UCERA) as Chief Medical Officer.

During her time assisting the Cancer Center, Dr. Blanchette took a number of steps to reduce Cancer Center expenditures by more than $3M a year. She relocated all Center activities into the Center buildings, releasing expensive leased space; pared administrative staff positions by leaving vacancies unfilled and worked with the medical school to shore up service contracts and eliminating unnecessary expenses and duplication. This was accomplished without harming the Center’s productivity.

Joe W. Ramos, PhD, Professor and Program Director at the University of Hawai‘i Cancer Center, takes over as Interim Associate Director, after receiving approval to do so from the UH Board of Regents.

“I leave the Center even more convinced about its importance and potential. Dr. Ramos is a respected world expert on cancer signal transduction and metastasis who has considerable experience with NCI designation from his five years as the Cancer Biology Program Director,” said Dr. Blanchette, who was saluted by Cancer Center employees at an event in the Sullivan Center. “An excellent transition plan has been presented for the new Interim Associate Director. I am assured that the Center will be in very good hands,” said Blanchette.

Dr. Ramos has been on the faculty of the UH Cancer Center for more than 12 years. He served as Program Director of the Cancer Biology Program from 2011 and took part in the 2012 renewal of the UH Cancer Center’s NCI designation. In the last year he has served as one of the Chief Academic Leads at the Cancer Center responsible for helping the faculty work with the NCI External Advisory Committee towards the upcoming renewal of the NCI designation in 2017. In addition, he has served the University of Hawai‘i as chair and member of many faculty committees, as a Faculty Senate representative where he served as Chair of the Committee on Student Affairs and as a UHPA representative.

Since coming to the UH Cancer Center from a position at Rutgers University in 2004, he has used insights from his research to identify novel potential drug targets to better fight cancer.

In collaboration with Chemists at UH-Mānoa and in New York, he has developed a number of new anti-cancer therapeutic drug leads, including one recently patented for kidney cancer. More recently he has focused on identifying new drug leads for brain tumors. His work has been published in top scientific journals including Nature, Cancer Research and PNAS (Proceedings of the National Academy of Sciences).

Dr. Ramos serves on several national and international grant review boards and is editor at the journal Molecular Cancer. The National Institutes of Health, the American Cancer Society, the U.S. Department of Defense and the Hawai‘i Community Foundation, among others, have financially supported his work.

“As Interim Associate Director I will focus on continuing the good stewardship that Dr. Blanchette established while being proactive in working with the outstanding Cancer Center faculty to ready the Center for a new Director and renewal of the NCI (National Cancer Institute) designation,” said Dr. Ramos.

More about Dr. Blanchette:
Dr. Blanchette, who graduated from Leeward Community College while raising three small children, went on to graduate from UH Mānoa and the John A. Burns School of Medicine with a Doctorate in Medicine and a Master’s degree in Public Health. She is a “Distinguished Alumna” of the both Leeward Community College and UH Mānoa. After medical school, Dr. Blanchette completed an internship and residency in Internal Medicine at Dartmouth Medical School and a two-year fellowship in Geriatric Medicine at Harvard Medical School. She is board certified in internal medicine and geriatric medicine. Dr. Blanchette returned to Hawai‘i in 1984 as the first fellowship-trained geriatrician in the state. She founded JABSOMʻs Department of Geriatric Medicine and has received many well-earned community awards for her outstanding service to Hawaiʻi.