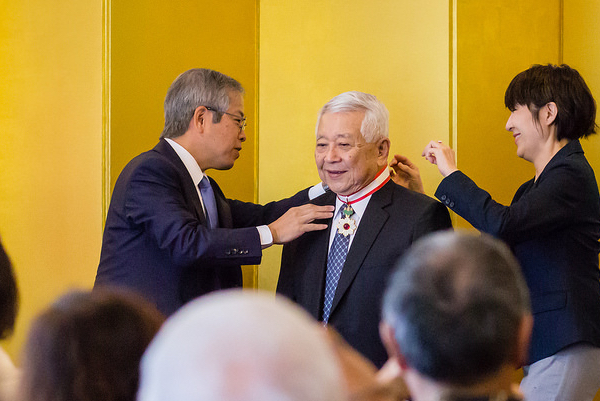 Dr. Satoru Izutsu, longtime Admissions Director and Vice Dean of the University of Hawaiʻi (UH) medical school (and served as a member on the University Health Partners of Hawaii board), was presented a medal, “The Order of the Rising Sun,” by the government of Japan today.

The ceremony was held at the official residence of the Consulate General of Japan in Honolulu.

Dr. Izutsu led efforts by the John A. Burns School of Medicine (JABSOM) to assist Okinawa following World War Two. The island badly needed physicians, and the UH and the Chubu Hospital in Okinawa began an MD training collaboration that has lasted 50 years.

“Today there are over 130 staff physicians at the 500-bed Chubu Hospital of which 70% are graduates of the UH-Chubu program,” said Koichi Ito, Consul General of Japan. 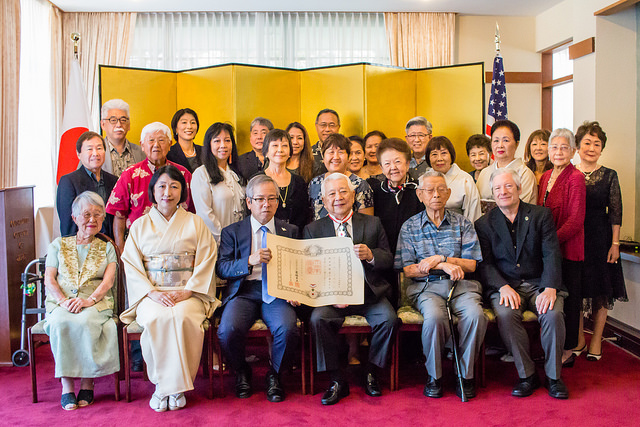 Dr. Izutsu, 89, retired from UH in December after three decades of service. He is a native of Kauaʻi.

“I am grateful for this once in a lifetime opportunity to have been a part of this adventure,” said Dr. Izutsu. “On a personal note, I am sure that my deceased immigrant parents from Fukuoka … would feel humbled by this recognition of their last child, the seventh in the family.”

Friends of Dr. Izutsu attended the morning ceremony, and were led in a traditional toast by former UH President Fujio Matsuda. “Kampai!” he proclaimed, as the guests raised their glasses, too, and answered back, “Kampai!”

The Order of the Rising Sun, Gold Rays with Neck Ribbon, is the third highest honor bestowed by the Japanese government, and the highest award that can be given to a non-citizen of Japan.

It is given in the name of the Emperor of Japan to those who have made distinguished achievements in international relations, promotion of Japanese culture, advancements in their field or development in the welfare or preservation of the environment.

To see photos from the event, click here. Photos by Deborah Manog and Vina Cristobal.
Video by Tina Shelton.