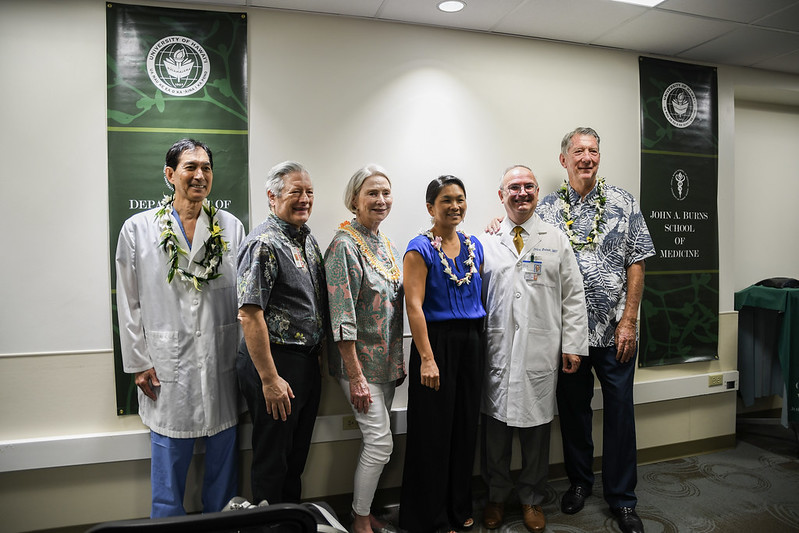 A faculty meeting at the OB/GYN administrative office at the Kapiʻolani Medical Center for Women and Children turned into an unexpected celebration.

On February 3, after an announcement by department chair Dr. Ivica Zalud, Dr. Bliss Kaneshiro became the first recipient of the Dr. Colin McCorriston Endowed Professorship in the Department of Obstetrics, Gynecology and Women’s Health at the John A. Burns School of Medicine (JABSOM). The endowment is named after the renowned former clinical faculty, who passed in 2001.

In front of peers, colleagues and medical residents, Dr. Kaneshiro expressed her gratitude to the late Colin McCorriston and his children, William “Bill” McCorriston and Kitty Pedersmeyer, who attended the event.

“I didn’t have the privilege of knowing Dr. McCorriston, but I remember all my classmates speaking of him,” said Dr. Kaneshiro, a 2001 alumna of JABSOM, where Colin McCorriston also served as clinical faculty. “He met with the medical students weekly . . . Today they are doctors in the community, continuing his impact in the work they do.”

During his life, Colin McCorriston mentored the next generation of Hawaiʻi physicians and delivered more than 10,000 babies in the state. Other doctors recounted their experiences with McCorriston: Dr. James DiMarchi shared that he “learned a lot” from McCorriston as his colleague. Dr. Gareth Yokochi chimed in his sentiments as well: Because of Dr. McCorriston’s efforts toward cultural diversity in the medical field, Yokochi became the first Asian doctor in the OB/GYN department when he and McCorriston worked at Straub Medical Center together.

Dr. Thomas “Tom” Kosasa, who was mentored by Colin McCorriston, established the endowed professorship alongside Colin McCorriston’s family to honor the late doctor, and to build up a new generation of doctors through Dr. Kaneshiro’s work. The Department of OB/GYN received an additional $500,000 gift from Dr. Kosasa to support the faculty. This donation is part of the department’s internal giving program. Dr. Ivica Zalud noted that OB/GYN, along with JABSOM as an institution, seeks to set an example for philanthropy by contributing internally.

“[Colin McCorriston] was a great teacher and a great person,” Kosasa said. “We are so happy we can honor him and keep his legacy going, and [we are] certain that Bliss Kaneshiro will continue his legacy.”

Dr. Kaneshiro is Program Director of the Family Planning Fellowship and the Chief of the Family Planning Division at JABSOM, which brings her ties to her UH alma mater full circle. With this professorship, the 1993 McKinley High School graduate plans to continue being a “good steward” by resuming her work to teach future physicians and contributing toward bringing new life into the world. Dr. Zalud beamed with pride as he mentioned that he mentored Dr. Kaneshiro as a medical student and it was gratifying being able to witness her passing on the knowledge that he and other teachers shared with her.

About the JABSOM Department of Obstetrics, Gynecology (OB/GYN) and Women’s Health

Physicians with JABSOM OB-GYN Department provide coverage for multiple hospitals in Hawaiʻi including Kapiolani Medical Center for Women and Children, The Queen’s Medical Center and Pali Momi Medical Center. Our JABSOM faculty, including MD volunteers, are in service annually for one-third of the births in Hawaii.

In addition to directly serving Hawaiʻi’s families, the UH Department of Obstetrics-Gynecology & Women’s Health creates its clinical learning environment for medical students, residents & fellows through its University Health Partners of Hawaii (UHP) faculty practice, giving all learners the robust real-world experience they need. The department has 37 physicians, including four who are part-time and three professors emeritus. Another 107 OB-GYN physicians in Hawaiʻi are volunteer faculty. Specialty training is offered in Obstetrics and Gynecology, Family Planning and Maternal Fetal Medicine.