Research!America president speaks with researchers and faculty about communication and national research updates 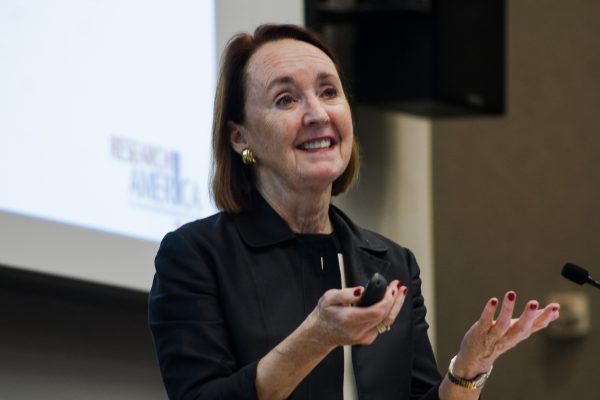 January 23, 2018 — Mary Woolley speaks to the public about the importance of advocating for scientific research. Vina Cristobal photo.

Speaking behind a screen that read “Breaking News”, the President of “Research!America” couldn’t help but talk about the agreement reached today on funding the government. The temporary deal should keep the lights on in federal facilities until February 8, while congress members try to reach a longer-term deal.

Among those keeping an eye on the funding is the University of Hawaiʻi medical school, where millions of federal research dollars support work aimed at reducing diseases like diabetes here in the islands. ($54M in 2016).

“Research!America,” is a national nonprofit that advocates for funding for science and medicine. Speaking at the medical school today, the organization president, Mary Woolley, said that polls by her organization show overwhelming public support for scientific research.

One of the most pressing issues according to “Research!America” is a cap placed several years ago on federal spending –including dollars for health research. Her organization advocates for Congress to raise those caps.

More about Mary Woolley:
Mary Woolley is the president of Research!America, the nation’s largest not-for-profit alliance working to make research to improve
health a higher national priority. Woolley is an elected member of the National Academy of Medicine (formerly the Institute of Medicine) and served two terms on its Governing Council. She is a recipient of the NAM’s Adam Yarmolinsky Medal for distinguished service. She serves on the National Academy of Sciences Board on Higher Education and the Workforce. She is a founding member of the Board of Associates of the Whitehead Institute, and a member of The Division of the Biological Sciences and the Pritzker School of Medicine Council of the University of Chicago. Prior to Research!America, she was the CEO of the Medical Research Institute of San Francisco.