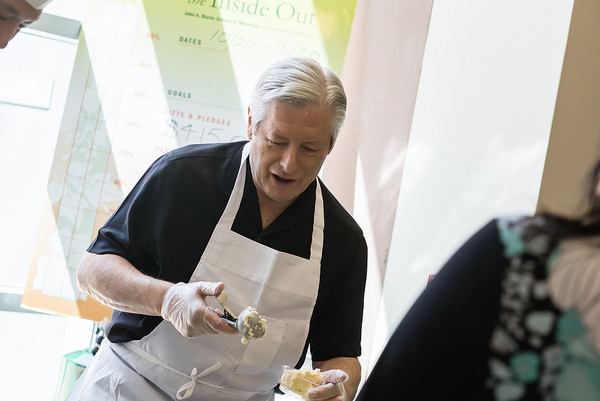 November 1, 2017 —
Pictured: Dean Jerris Hedges is scooping ice cream being distributed for free on Oct. 6, 2017 to kick off the JABSOM Internal Giving Campaign. He hasn’t missed one of these kickoffs yet!

Just before Halloween, Dean Jerris Hedges quietly purchased and provided gift cards to the school’s Waiola Cafe to give to student organizers of the “2 Ghoul 4 School” Halloween Costume Extravaganza. The gift cards become awards for the best costumes in an annual event that lifts morale at the school, and also displays how much thought our future physicians are putting into the annual Halloween Carnival, usually that same evening, which they and the Hawai’i H.O.M.E. Project volunteer to host for homeless children at several O’ahu shelters, to give the keiki a safe space to trick-or-treat.

The Dean’s generosity at Halloween has been nonstop since he became the leader of the John A. Burns School of Medicine (JABSOM) in 2008. That is just one of many, many ways Dr. Jerris Hedges sets a personal example of why those of us at JABSOM should give to our community or invest in the community-based work done at the University of Hawai’i (UH) School of Medicine.

Soon after Dean Hedges arrived at JABSOM, he directed our UH Foundation officer to organize “Giving from the Inside Out,” an Internal Giving Campaign through which generous JABSOM employees contribute a portion of their salary–small or large–to help pay for programs that advance JABSOM’s mission to teach and to heal throughout Hawai’i and the Pacific Region. The 2017 Campaign is currently underway, but to date, JABSOM faculty and staff have donated nearly $3 million dollars to the school

Every year, Dr. Hedges gives generously to the internal giving campaign, and to several funds including the JABSOM Rural and Neighborhood Island Medical Education fund, The Hawai’i Homeless Outreach and Medical Education (H.O.M.E.) Fund, and many student scholarship funds. He also gives to local nonprofits including Aloha United Way, the Hawai’i Food Bank, The Annual Men’s March Against Domestic Violence, The Komen Race for the Cure, Saint Louis School (where former Governor John A. Burns was educated), the Hawai’i Medical Association (HMA) the HMAH, the Chinese Chamber of Commerce and the Hawai’i American Heart and Lung associations, and others. Whenever marchers in these or other causes need t-shirts imprinted with the JABSOM logo, Dr. Hedges pays for those, too, from his own pocket.

We are proud of Dr. Hedges’ leadership in promoting generous giving to our school and to the Hawai’i community. Mahalo, Dean Hedges!

Please enjoy this video interview with Dr. Hedges produced by the UH Foundation, “Why I Give”