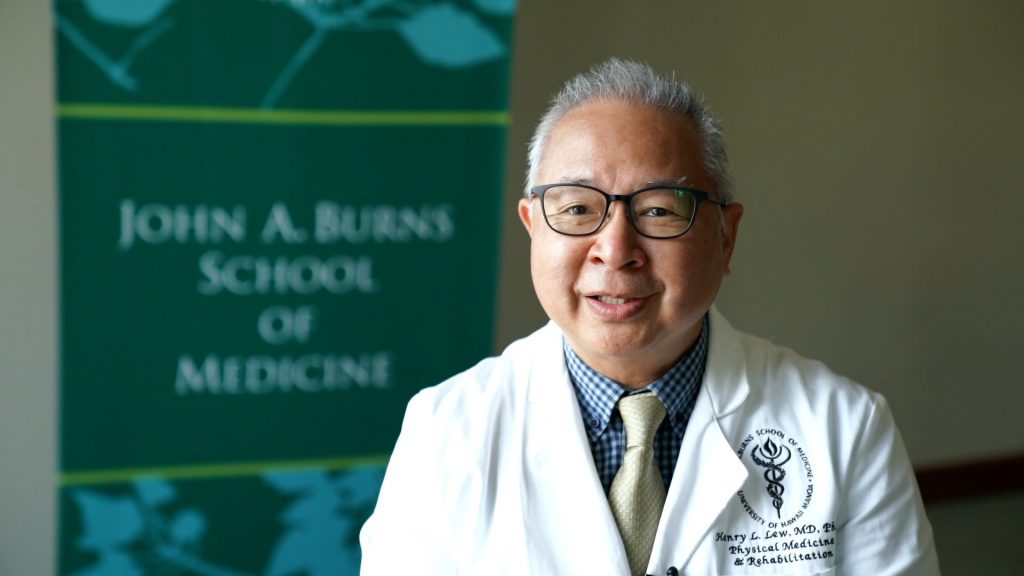 After overcoming a hearing impairment he’s had since childhood, Dr. William J.F. Lew received his Ph.D. from Southern Illinois University, and eventually became a world-renowned scholar in Educational and Developmental Psychology. Dr. Lew worked at University of Hawaiʻi at Mānoa’s East West Center, Harvard University’s Fairbank Center, Chinese University of Hong Kong, and National Chengchi University in Taiwan.  Several months before his passing, he published a seminal textbook, titled Understanding the Chinese Personality. He was widely praised as an excellent teacher and innovative researcher.

Twenty-two years after Dr. William Lew’s passing, his son, Henry, at University of Hawaii John A. Burns School of Medicine (JABSOM), would continue the legacy by receiving a National Award for Innovation & Impact in Education from the Association of Academic Physiatrists (AAP) on February 13. The AAP is an organization of academic Physical Medicine and Rehabilitation physicians (physiatrists) who are dedicated to improving patient care by advancing the specialty through research and education. The award honors an AAP member for outstanding new developments and improvements in education that benefits the academic and clinical communities.

Years before the COVID-19 pandemic, Dr. Lew had the vision to streamline online education. He and his team developed an online educational platform via the International Society of Physical and Rehabilitation Medicine (ISPRM) – for which he served as the Education Committee Chair. According to the ISPRM President, Dr. Walter Frontera, “the global impact of Dr. Lew’s efforts to promote online disseminations of physiatry education is especially important in this unprecedented time of pandemic and social distancing … the ISPRM members are still enjoying the results of his service.”

Through the American Journal of Physical Medicine and Rehabilitation (AJPM&R), Dr. Lew spearheaded the creation of a video publication format, which generated popular online publications that are referenced by MEDLINE.  This innovative video publication platform was immediately embraced by the academic community, and used globally as a reliable source of education for practicing clinicians.

In his acceptance speech, Dr. Lew thanked Dean Jerris Hedges for recruiting him back to Hawaii, and for encouraging him to devote time to education while maintaining his clinical skills.  He acknowledged his JABSOM colleagues and many leading rehabilitation specialists (Drs. David Cifu, Walter Frontera, Mooyeon Oh-Park, Rochelle Dy and Rex Ma) who supported him throughout the years. His faith has also kept him grounded in his profession: “Everything I do, I hope to help others and to honor God.”

Dr. William Lew would indeed be proud of Henry, not just for continuing his legacy, but also for Henry creating his own.

About Dr. Henry Lew
Back in 1974, Henry Lew attended Washington Intermediate School in Honolulu, Hawaii.  He finished high school education in Hong Kong, and completed his MD degree at National Taiwan University. In 1986, to learn more about hearing sciences and disorders, he enrolled as a graduate student at the University of Hawaii’s Department of Communication Sciences and Disorders (CSD), where he now serves as Professor and Chair.  Prior to his Physical Medicine and Rehabilitation (PM&R) training at University of Washington, Dr. Lew obtained a PhD in Audiology at Baylor College of Medicine, where he won the Outstanding Graduate Research Award.

Combining his experience in rehabilitation medicine and audiology, Dr. Lew published 145 scientific articles, 5 textbooks, and received multiple federal grants to advance evidence-based practice. In 2000, he joined Stanford University as Clinical Assistant Professor, and served as Medical Director of the Inpatient Rehabilitation Center at the Palo Alto VA. In 2008, he transferred to the Boston VA to begin a new leadership role as Chief of PM&R Service. He was promoted to Associate Professor at Harvard University.

In 2010, Dr. Lew was recruited by Dean Hedges to return to University of Hawaii.  He worked with the Dean’s office to implement a medical student exchange program between JABSOM and Taipei Medical University.  His department also hosted student clinicians from Japan and Taiwan to observe at the University Health Partners of Hawaii Speech and Hearing Clinic, a training ground for future speech-language pathologists.