Aloha to a Great One: Long Live Dr. Elizabeth Tam 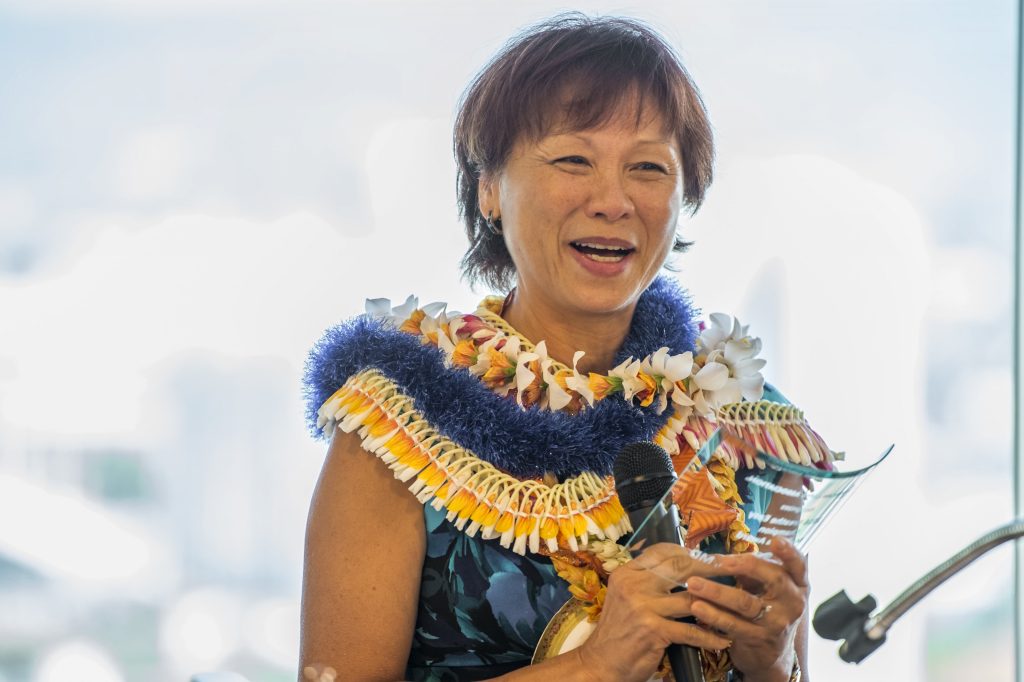 On October 8, 2021, our hearts broke when we got the news that Dr. Elizabeth Tam had passed away that morning. There are not words to describe what this loss means to us at UHP and JABSOM.  It is unthinkable – unimaginable! – that we will not again have her among us, that we won’t feel the warmth and sparkle of her gaze, or hear the joy and caring in her voice.

But she is not gone. She’s here with us for sure – her image is everywhere in our media communications – she’s been all over our website, in our ads, on TV news segments. She was so very photogenic, but beyond that, a deeper kind of beauty: wisdom, calming energy, and a generous spirit seemed to flow from her very being. She was always the first to come to mind whenever the marketing committee needed an image of a doctor for our branding efforts.  It was truly remarkable that, busy as she was with all of her many responsibilities, she shared her time with us so graciously.  She seemed to give so effortlessly.

Dr. Tam remains indelibly with us in the work of the providers she mentored and inspired, in the guiding vision of the many students and residents she taught, in the many patients she cared for as they look back in gratitude at that beautiful, brilliant doctor who so skillfully helped them on their journey back to health.

To say she was highly accomplished is an understatement.  Part Native Hawaiian, Liz Tam grew up on Oahu and began attending college at the University of Hawaii at Manoa, but transferred to the University of California – Davis, where, she said, she found that being Hawaiian was “not something to hide, but something to share and highlight.”  From there, she attended medical school at UC San Francisco, where she met her future husband. They were fortunate to be matched for residencies at neighboring hospitals in Boston:  he at Massachusetts General and she at Brigham and Women’s Hospital/Harvard Medical School.

At that prestigious institution, she discovered that the people she worked with and learned from “were not arrogant. They were very helpful to me in every way,” she said, “yet these were the people whose names you see in the New England Journal of Medicine. That didn’t stop them from being genuinely nice.”  True as that may be, she seemed to bring out the “nice” in people.

After completing their residencies, Dr. Tam and her husband began working at UC San Diego, but they really wanted to be in Hawaii.  He was able to find a position at Straub, and she joined JABSOM’s faculty in 1992 where she remained until she retired last summer.  For 15 years prior to her retirement, she served as Chair of the Department of Medicine and actively taught and mentored medical students and resident physicians throughout her years at JABSOM.

Dr. Tam also generously gave her time to serving the community at large. A vivacious but down-to-earth speaker, she worked to promote tobacco control and vog research, and was often asked by local media venues to share her considerable knowledge with the public issues affecting lung health and other topics.

This year, the American Lung Association, in recognition of all the work that Dr. Tam has done on behalf of lung health, announced that an award given to contestants that go above and beyond in working on this important cause will be named The Dr. Elizabeth Tam Breath of Hope Award and presented at the Miss Hawaii Volunteer event. Fortunately, she was able to learn about this honor before she passed.

Those of us at UHP will always be proud to call her an important leader and member of our community.

“My philosophy in all this is, as a mom, a teacher, and a physician, you get so that people don’t need you anymore,” Dr. Tam said. “You push for this independence and empower them.  That’s my goal. That’s generally how I’ve operated.”

Aloha, Dr. Tam.  Your strength and spirit lives in us always.  We will never forget you.