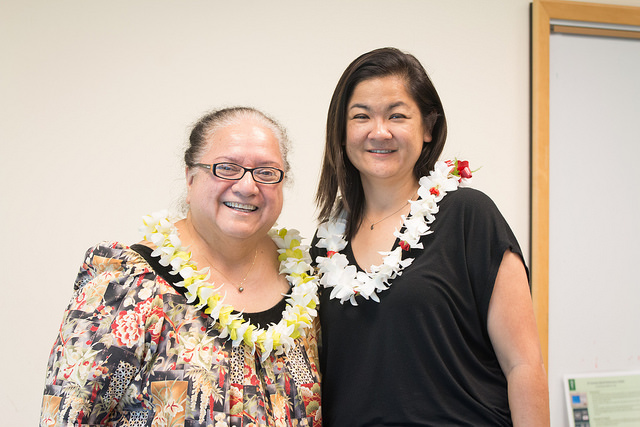 This year’s Women in Medicine talk, sponsored by the JABSOM Office of Student Affairs and the Native Hawaiian Center of Excellence, focused on the power of the female voice in modern times.

Women make up more than half of the providers – doctors, medical assistants, nurses – who are affiliated with JABSOM and its faculty practice, University Health Partners of Hawaii (UHP Hawaii).

Lead with ‘power and love’

Dr. Andrade shared her experiences growing up as a Native Hawaiian woman and leader. She also told about her experiences as a leader in the revitalization of the JABSOM Department of Psychiatry and the creation of UHP.

She noted that her familial upbringing, as well as her experiences of initially being rejected from medical school and eventually being admitted into the ʻImi Hoʻōla program, attributed to her development as a leader. She also challenged the tacit bias in modern day culture’s perspective of women – that any woman who wields power is placed in a negative light.

“An effective leader must learn to build and use power to achieve his/her organization’s purpose and aims,” Dr. Andrade said. “It would take me two decades to fully comprehend and effectively apply this leadership principle. I think the reason it took me so long to fully grasp the necessity to build and use power was because of an underlying assumption that women should not and cannot wield power.”

Dr. Andrade shared the four types of power: expert power (focusing on education, reseach and clinical skills); reward power (developing healthy relationships with others through acknowledging their performance); reverent power (building a level of respect and trust with peers); and generative power (bringing about social change).

As a female leader and as a doctor, she addressed that love and power are two things that go hand in hand, and one cannot thrive healthily without the other.

“Power without love is reckless, abusive and self-serving, but love without power is sentimental, commercially exploitive and limited,” she said. “Generative power is formed when power is permeated and influenced by love.”

She encouraged attendees to utilize the combined effort of power and love to create new opportunities for women.

“The advancement of women in medicine and our larger society must incorporate these four kinds of power to create new cultural narratives and underlying assumptions where women build and direct power that ends the current sociocultural inequities and hierarchies that ignore the voice and presence of women.”

Setting the bar higher than ‘boys will be boys’

While Dr. Andrade emphasized the importance of being a strong female leader through her own experiences, Dr. Soon’s presentation shifted the focus to current events and circumstances and how those paralleled in her life.

In wake of accusations against Judge Brett Kavanaugh, Dr. Soon pointed out that some people dismiss sexual harassment cases with the phrase, ‘boys will be boys.’

“Medicine is not immune to [sexual harassment] at all. Is there sexism in medicine? Yes. Absolutely. Aside from the obvious statistics like unequal pay and the disproportionate lack in women in medicine as department chairs, hospital dept chairs and committee chairs. There’s all that. But I have seen sexual harassment. It’s real. Medicine right now still actually is a man’s world. The system still benefits men.”

As the mother of two young boys, she wants her sons to know that women can share the equal amount of responsibility and power as men.

“There’s got to be a higher bar than ‘boys will be boys’. The future can change. We’ve got to be a model for our younger generations.”

She adds on that in order for women to be game changers, they must take hold of positions of leadership.

She prompted attendees, specifically the medical students, that they need to speak up and listen more when faced with situations relating back to harassment.

“We’re going to call out sexual harassment whenever we see it. And I’m speaking for myself. I’m making a pledge to all of you now. I am going to do this every time I see it, and every time I haven’t. We can’t just play the game and get to the top. We’ve got to change the game.”