Department of Family Medicine: JABSOM and the Mālama Honua Voyage 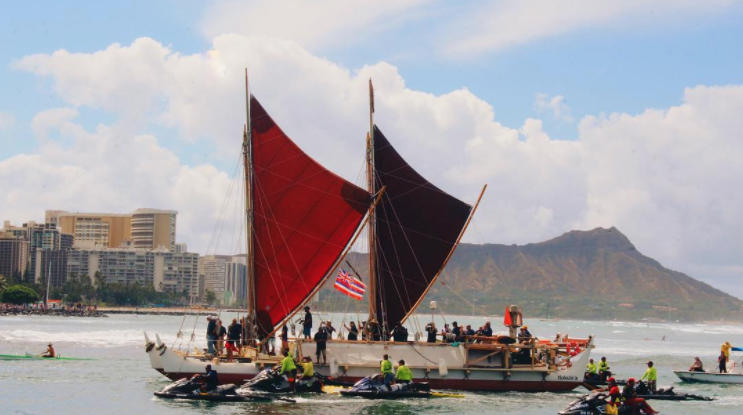 On-board the Hikianalia was Dr. Neal Palafox (JABSOM MD 1980) of the University of Hawaiʻi (UH) John A. Burns School of Medicine, who was serving — as a long line of UH-trained physicians have done — as kauka (physician) on the closing leg of the journey. We asked Dr. Palafox to write about his experience, from a physician’s point of view.

—-
JABSOM and the Mālama Honua Voyage 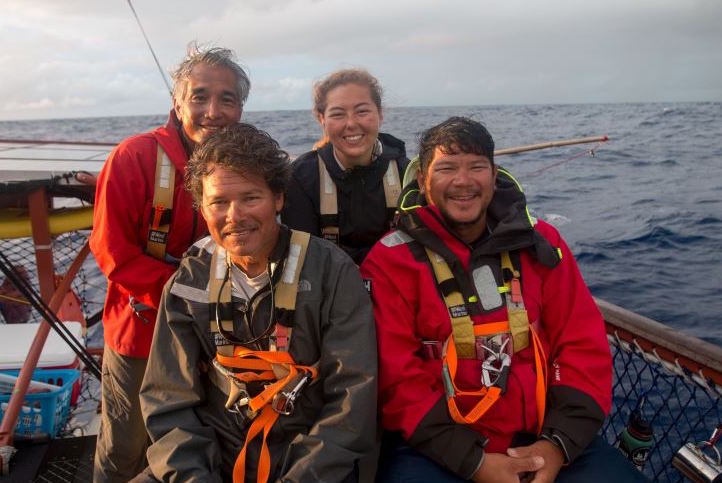 In May 2014, the Polynesian Voyaging Society (PVS) embarked on a three year around the world voyage with two double-hulled Hawaiian sailing canoes (wa’a), the Hōkūleʻa and Hikianalia. The wa’a are traditional Polynesian in design and are guided by navigators adept at ancestral Pacific navigational science.  The world voyage brings focus to the traditional assets of Pacific Culture and Pacific traditional Science, highlights Mālama Honua (to care for the earth), and aims to demonstrate the power and necessity of a Pacific and Hawaiian cultural renaissance, especially as it relates to the health of  Pacific peoples. After 3 years and over 40,000 nautical miles of sailing leg 31 B, the canoe’s voyage from Tahiti to Hawai’i was completed on June 17, 2017.

JABSOM faculty physicians, whose primary duty is to serve as the wa’a medical officers, have been an integral part of the Mālama Honua worldwide voyage and the Polynesian Voyaging Society. In 1976, prior to Mālama Honua, Dr. Benjamin Young sailed on the Hōkūleʻa’s maiden voyage from Tahiti to Hawai’i. During the last three years of the Mālama Honua worldwide voyage, faculty from the Department of Native Hawaiian Health, Dr. Marjorie Leimomi Mau sailed from Tautira, Tahiti to Rarotonga Cook Islands; Dr. DeAnn Leialoha Carpenter crewed from the Cook Islands to Samoa; and Dr. Martina Kamaka journeyed from Waitangi to Auckland in New Zeland in 2014. Dr. Neal A. Palafox (Department of Family Medicine and Community Health) voyaged on the homecoming leg, Tautira, Tahiti to Hawai’i, aboard the Hikianalia from Tautira, Tahiti to Hawai’i from May 2017 to June 2017.

JABSOM faculty physicians grew into the Malama Honua voyage. Dr. Mau sailed on the Hōkūleʻa in Pohnpei in 2009, Dr. Kamaka trained with several JABSOM medical students on the Hōkūleʻa, and Dr. Palafox met Master Navigator Mao Pialug in the 70’s and worked with PVS attempting to initiate resident participation in the Polynesian Voyaging Society in 2004.

There is a long list of JABSOM graduates who have had major roles in PVS and the Malama Honua voyage. A few stand out. Dr. Ben Tamura was a member of the PVS since 1991 and currently coordinates the medical support for all PVS voyages.  Dr. Nathan Wong sailed many of the early voyages (1980-1990) and Dr. Melvin Chang has sailed many of the later voyages since 2000.

The list of Hawaii’s Community physicians who have participated is equally long. The list of the volunteer physicians from the JABSOM family and Hawai’i’s community is listed at the end of the article.

What is the relevance of Mālama Honua and the PVS to JABSOM? Beyond faculty clinicians providing essential medical screening, acute medical care, and preventive health services for the crew, what else is there? The Hōkūleʻa and Hikianalia, are metaphorically, and in real time, spaces and vessels of learning. The learning is experiential to includes methods of traditional building and sailing of the wa’a, understanding the relationship of the wind, stars, moon, and sun to the destination, and witnessing climate change from a Pacific lens.

JABSOM is also a vessel for learning and specifically has the kuleana (responsibility) to create and nourish a space to understand the nature of, and proactively promote healthy lives for Native Hawaiians and Pacific Islanders. Looking through the prism of an academic faculty physician at the John A. Burns School of Medicine sailing with the Mālama Honua Voyage had everything to do with the Pacific people’s health— and societal well-being.

Mālama Honua articulates with health in domains that the healthcare institutions could and should better understand.  The healing process of the wounds associated with modern societal movement and its associated structural violence to Pacific peoples begins with this understanding.  On the voyage, we the faculty were able to touch Earth’s changing environment.  Our senses were awakened to reaffirm how identity, culture, tradition, ancestry, physical activity, nutrition, policy, and globalization, all weigh on the health of the Pacific.

Our kuleana, as JABSOM clinical faculty, is to teach and apply what we learned, as we have been provided an important dialogue about health and health care.

For those who are interested in being part of the voyage– several ability and aptitude tests are required of crew members, including:

a) physical fitness (swim a timed nautical mile (1.2 miles) in the ocean, a timed mile run/walk, pushups and pull-ups)
b) assessment of basic sailing  proficiency (able to steer with a traditional sweep (hoe), understand basic traditional navigation methods, setting sails/rigging and sail knot tying)
c)  having appropriate cultural knowledge (understanding and reciting cultural protocol, mele (songs), pules (prayers), oli (chants ) for proper entrance/leaving /respect in Tahiti and Hawai’i)
d) being comfortable with and on the open ocean
e)  being able to fit and work with all crew members
f) and most importantly a crew member must believe in and practice PVS values and its mission.

Disclaimer: Be careful, the voyage is often an unexpected life changing adventure.

Below is a full list of JABSOM volunteer physicians who have sailed with the Polynesian Voyaging Society:
* = JABSOM Faculty and or Alumni