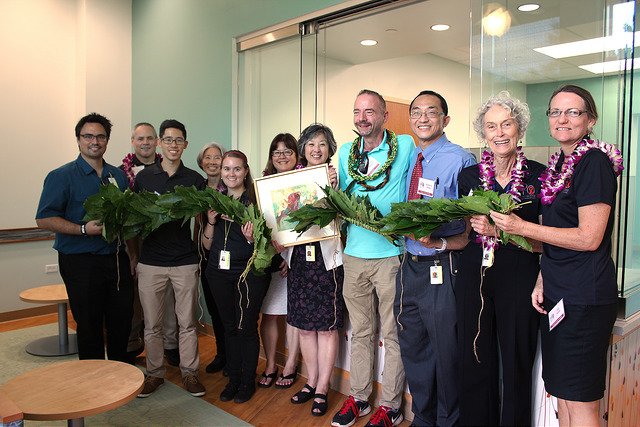 To view the full album from the clinic opening, click HERE.

“The most important goal of our health research is to fight the diseases which strike our citizens disproportionately, especially those diseases which shorten their lives,” said Dr. Jerris Hedges, MD, JABSOM Dean. “The new clinic has unique features to help in those studies of illnesses including obesity, diabetes, heart disease, HIV and age-related impairment,” said Hedges.

The new facility, approximately 3,550 square feet, includes a waiting/reception room, office and charting areas, eight exam rooms, and two procedure rooms. An additional room accommodates a dual energy absorptiometry (DXA) machine. The DXA measures bone density (useful in osteoporosis diagnosis and research) and also can measure the amounts of fat and muscle by regions of the body, helpful in the study of metabolic diseases, including obesity, diabetes and heart disease, and in fitness studies examining how to build muscle and strength. The machine will be employed in studies of frailty in the elderly and bone density changes related to HIV and various therapies.

The Clint Spencer Clinic, operated by the JABSOM Hawaiʻi Center for AIDS and directed by Dr. Dominic Chow, was the first to move into the renovated space. Formerly located at 677 Ala Moana, the Clint Spencer Clinic provides primary care as well as consultative care for all of Hawaiʻi’s HIV-infected population.

A variety of other researchers will also use the clinical research space, including investigators monitoring patients in UH Cancer Center clinical trials, and others collaborating in health research with JABSOM and the Cancer Center, including faculty in the schools of nursing, pharmacy, and social work at UH.

UH Clinics at Kakaʻako is operated by JABSOM, in collaboration with the University Health Partners of Hawaiʻi, which is the JABSOM faculty practice plan. Dr. Cecilia Shikuma, Director of the Hawaiʻi Center for AIDS, oversees the facility.

The space for the new UH Clinics at Kakaʻako originally housed offices. It and was renovated using $1.8 million in JABSOM building reserve funds. Before occupancy, the new site was blessed during an open house last month, held in connection with December’s launch of the “Hawaiʻi to Zero” campaign, aimed at eliminating HIV in Hawaiʻi.

News coverage about the new clinic:
Note: UH Med Now cannot guarantee the longterm viability of these external links to media sources, as they are controlled by the media outlets.

About the John A. Burns School of Medicine
The John A. Burns School of Medicine (JABSOM) at the University of Hawaiʻi honors its unique research environment to excel in science-based efforts to eliminate diseases that disproportionately affect people in Hawaiʻi and the Pacific region. US News & World Report ranked JABSOM among the top 20 medical schools in the U.S. for its Primary Care Program in 2016. Annually at JABSOM, more than 600 students or trainees are learning medicine, practicing medicine under our supervision or seeking biomedical science degrees.