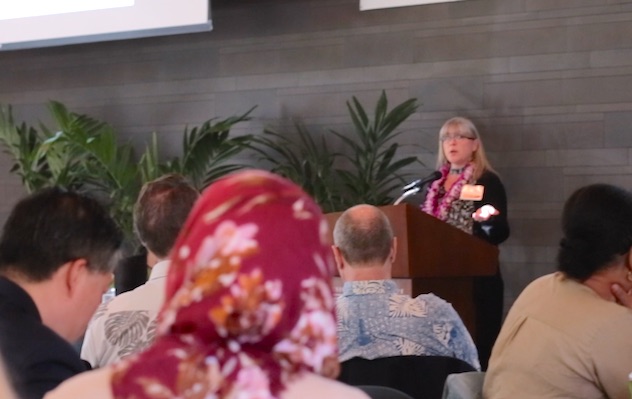 Get politically involved. That was a key message brought to Hawai’i this week by an expert on the movement to eradicate HIV and AIDS. HIV-AIDS related organizations, community members and researchers in Hawaiʻi convened at the University of Hawai’i medical school on Janury 16 and 17 in their annual conference on the effort to stamp out AIDS in the islands.

The conference is hosted by the Hawaiʻi Center for AIDS, a UH affiliate dedicated to HIV prevention efforts.

The expert from Washington State said when their governor signed on to the “End HIV” movement there, it made a huge difference.

“I think in Washington we were very fortunate because our governor signed onto our End HIV proclamation in December of 2014, so his political power behind that decision has really opened a lot of doors for us to work with other agencies, other state agencies, we got some additional funding,” said Elizabeth Crutsinger-Perry, with the Washington State Department of Health. “So, I think using your political power and getting legislators or leaders of agencies to join your effort is how this is going to be successful because just the Department of Health or just community providers is not going to be enough, it has to be a community wide effort.”

“So the ‘four gets’ are get insured, get tested, if you are negative get ‘prep’ and if you are positive get treatment,” said Crutsinger-Perry. “Prep” refers to the fact that there is a way now for people who do not have HIV but who are at substantial risk of getting it to prevent infection by taking a pill every day. The pill, with the brand name Truvada® contains two medicines (tenofovir and emtricitabine) that are used in combination with other medicines to treat HIV.