Department of OB-GYN & Women's Health: Striving to "Make a Difference" 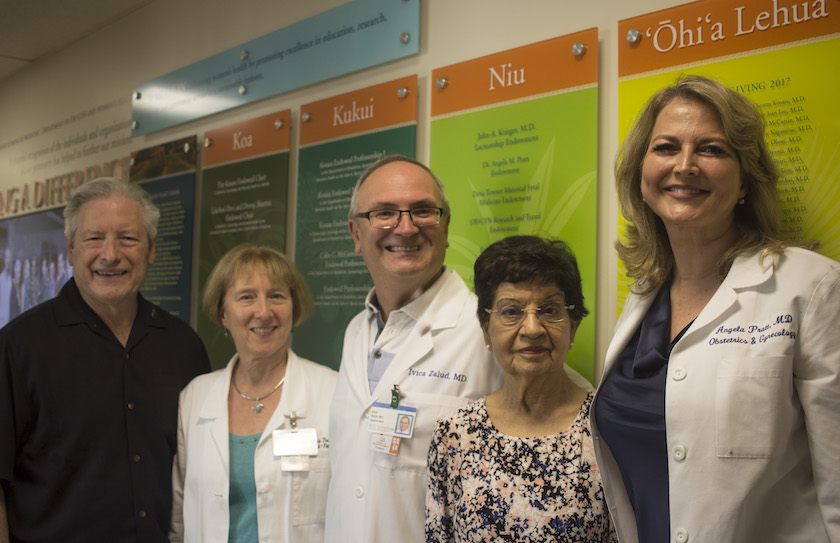 Etched on the wall, in orange, read: “Making a Difference,” with a television screen displaying milestones of the Department of OB-GYN. The adjacent four panels – which incorporated four of the plants in the medical school’s Māla Lāʻau Lapaʻau (Medicinal Plant Garden) –  focused on JABSOM’s history, the department of OB-GYN, and University Health Partners of Hawaii, the faculty practice of the medical school and the UH Health Sciences.

Dr. Zalud then invited the group in the conference room to reflect on the donors’ investments.

“Philanthropy is a real hallmark that we have done something exceptional,” Dr. Zalud said. “This is not a gift, this is an investment, this is your trust. You are doing something and you want to see what happens, and it’s how we inspire our students and residents to be the best physicians. And you’re helping [to develop] OB-GYN’s memory with all this data here. We’re creating this little testament so that when people come here, and they want to come and take a look at some of these pictures and see sights about our doctors. Other people can look and be inspired. And how we can continue that? It’s a lifelong journey.”

This is among the many innovations that the department has made in the past year. In July 2017, Dr. Kosasa awarded three Kosasa Endowed Professorships to Dr. Michael Carney (Gynecological Oncology), Dr. Men-Jean Lee (Maternal Fetal Medicine), and Dr. Keith Terada (vice chair of the Department of OB-GYN). These gifts accumulated to a total $6 million into the Department of OB-GYN.

In the same month, Dr. Pratt created the “Angela Pratt Endowment,” a contribution that would help to further faculty, student and resident training on neighbor islands and research in Native Hawaiian Women’s Health.

Dr. Zalud was named Physician of the Year by the Hawaii Medical Association in October 2017.

The department, in partnership with the Department of Family Medicine, opened a clinic in the Pali Momi Outpatient Center in Aiea in February 2018.

This September, the department will extend its practice to HawaiʻI Island, with Dr. Emilie Stickley being the first female OB-GYN from the department to practice in Hilo.

“One of the things that is hardest to do with state funds is to support some of the innovation and research that’s focused on the needs of people of Hawaii,” Dean Hedges stated. “And through donations, such as all of you have made, we’ve been able to create that opportunity and it’s wonderful,” Dean Hedges stated. “You’ve clearly made a difference on how care is delivered here, but also those who are trained in the system, to take that information and go on and not only make Hawaii a healthier place, but other parts of the US where they may end up practicing. But what has transformed this department has been, in large part, contributions of research, specialized educational elements that have developed, that we just couldn’t do without those funds. So thank you all for your generosity and your vision. Just know that your contributions will make a significant change.”

The doctors that have made investments into the department means more than a name on the wall.

For Dr. Pratt, her act of giving was inspired by the late Dr. Colin McCorriston, who she looked up to as a mentor. She recalled of a time when she witnessed Dr. McCorriston’s generosity during her years as a JABSOM student.

“One day, it was three of us students in the cafeteria and we’re all counting our quarters,” Dr. Pratt said. “And he came up and he’s getting his lunch, and we’re picking and choosing what we’re going to eat. He came behind us and told the cashier, ‘I got these three.’ And I never forgot that. When I stand in the cafeteria and I see students in front of me, and I’m thinking, “Someone did that for me, and I’m going to pay it forward.” He probably didn’t even give it a second thought. For him, it was just buying kids some lunch. But when I’m in the cafeteria and I see these students, and I start to do that, and I tell them as they’re leaving, ‘Remember to do it back someday.’

“We do this because we want others to be perhaps passionate about it and follow suit, and to do the steps we do to make our community a better place. [Dr. McCorriston] taught me a lot, and I’m very grateful. So you know, you just get so empowered by that, the extensions of yourself, because you are trying to teach them your field and be kind to them, and want them to be the best that they can be. And they grow up very grateful and give it back to you in ways you could never possibly imagine. It’s beautiful.”

“Imua (go forward with strength),” Dr. Zalud said. “[This department is about] Kūlia i ka nu’u, striving to the highest.”

Dr. Zalud hopes that these investments will “inspire” not only other OB-GYN doctors to give, but that other departments will also donate and eventually develop internal giving programs of their own.

“Any investment is valued, small or big,” he said.