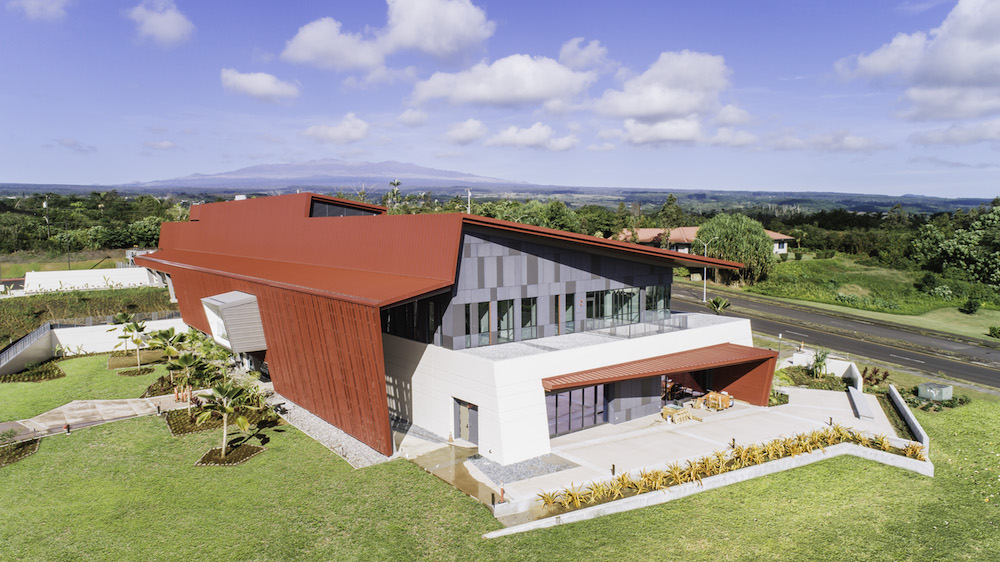 When student pharmacists at the University of Hawai`i at Hilo Daniel K. Inouye College of Pharmacy (DKICP) enter the new building for classes Jan. 14, 2020, they will be standing on the shoulders of 744 Pharm.D. graduates who came before them. Many of those graduates, who are gainfully employed in Hawaii and beyond today, were instrumental in helping the legislature envision a future when this building would help the economy and the growth of Hawaii Island as well as fulfill the mission of the college which is to improve the health of Hawaii and the Pacific Basin through education, research and service.

DKICP is planning a Grand Opening on site at the University of Hawai`i at Hilo at the corner of South Aʻohōkū Street and Nowelo Street Dec. 4 at 10 a.m.

The College admitted students in 2007, initially sharing classrooms and laboratories with other departments at UH Hilo. Since 2009, College of Pharmacy faculty members have been teaching future pharmacists in a group of four temporary modular buildings mainly to serve the purpose of teaching.  At times over the 13-year history, faculty and staff were located to as many as four other locations around Hilo.

The Hawaii state legislature approved $5.5 million for planning and design of the College in 2009, and WCIT Architecture in Honolulu was chosen to help the College put their dreams to life. But by 2013, the legislature had twice denied funding for plans to construct the building. After scaled-back building plans and budget requests, they approved a revised funding in the spring of 2014, and the College held a groundbreaking ceremony that December.

Bids for the construction contract came back higher than funding allowed, so WCIT created another redesign in the fall of 2015. The construction project was awarded to Hilo’s Isemoto Contracting Co. in April 2016, with construction beginning that fall.

Located in the same block as the modular classrooms, which will be upgraded to more research lab and office space, the new building is just uphill from ‘Imiloa Astronomy Center. Everything about the design corresponds with other buildings on UH Hilo campus, including Ka Haka Ula – College of Hawaiian Language, also designed by WCIT.

“This new building is due to the hard work and diligence of innumerable individuals. But most especially I thank the students for representing the college as earnest and dedicated student pharmacists,” said Dean Carolyn Ma. “It will provide the most modern teaching facilities that allow for communications via distance, as well as the latest simulation technologies in order to provide the most modern methods of education with other health professionals.”

That technology is important because even though the main campus is based in Hilo, Ma said the College of Pharmacy has faculty on Kauai and Oahu who practice in clinical settings, and about 75 percent of students rotate to these islands as well as to the South Pacific area of American Samoa, Guam, and Saipan.

But Hilo and Hawaii Island remain the utmost importance to the future of the College, Dean Ma pointed out. From community services and health fairs around the island, part of the College’s mission is to educate our community about living healthy lives, especially in the rural areas. Annual events since the college’s inception, such as the annual DKICP health fair, Merrie Monarch, Hui Malama Ola Na Oiwi Ladies Night and the ALOHA Care Project, are health and educational collaborations that solidify our ties to the community who support our college in numerous ways. The building emphasizes the value of being part of the local community or ohana and remains one of the main reasons that attracts students to this particular pharmacy school, she said.

“With this structure, we continue to live up to the legacy of our founder, the late Senator Daniel K. Inouye, when he envisioned our College to be the center of excellence for Hawaii Island.”