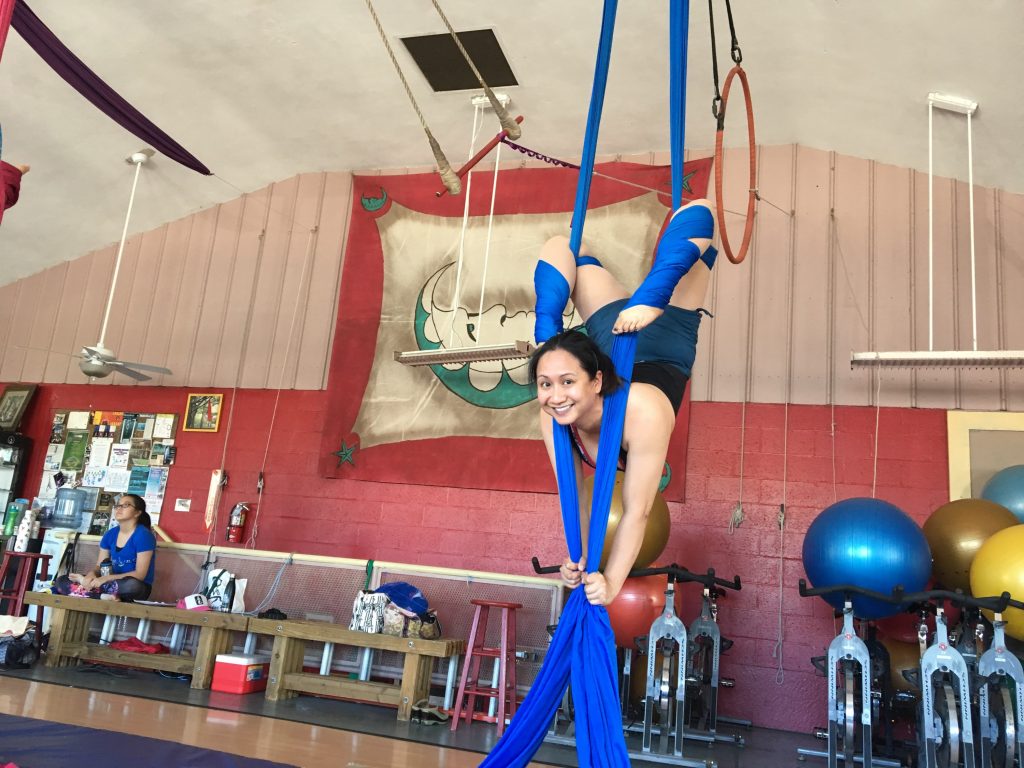 Aerial silks (also known as aerial contortion, aerial ribbons, aerial tissues, fabric, ribbon, or tissue, depending on personal preference is a type of performance in which one or more artists perform aerial acrobatics while hanging from a fabric. The fabric may be hung as two pieces, or a single piece, folded to make a loop, classified as hammock silks. Performers climb the suspended fabric without the use of safety lines and rely only on their training and skill to ensure safety. They use the fabric to wrap, suspend, drop, swing, and spiral their bodies into and out of various positions. Aerial silks may be used to fly through the air, striking poses and figures while flying. – Wikipedia

She calls it her “journey of fitness.” It is a journey that UHP’s Dr. Pia Lorenzo began nearly ten years ago while doing her fellowship in geriatric medicine at JABSOM. She mentioned how she was studying sarcopenia (the loss of muscle as a natural part of aging) when she was shown some slides of a cross section of the thigh of a 40-year-old, then one of a 70 year old who had been a sedentary person, then one of a 70-year-old triathlete who had exercised all of his life.  She said that “you could see all the muscle” of the 40 year old’s thigh, while the sedentary 70 year old’s thigh looked like it was mostly fat.  However, the active 70-year-old’s thigh looked just like the one belonging to the 40-year-old.

It was at that moment that she knew that she didn’t want her body to be that of a sedentary person.

“By the time I’m elderly, I don’t want to be like that,” Dr. Lorenzo said.

And so she began looking for an activity that would keep her fit.

“I got some running shoes, I discovered I didn’t like running. I joined a gym. I discovered I hate the gym. I tried salsa class and quit the day my shoe went flying.  I wasn’t that good at it. I even tried pole dancing.  It was ok,” she said with a little laugh, “but it wasn’t quite me.” She also spoke about trying yoga, but that wasn’t for her either.

Like a lot of people who set out to develop a program for fitness, she tried a number of different things that were not to her liking.  But unlike so many of us, she kept going until she discovered something that suited her:  the art of the aerialist. Sometimes referred to as aerial acrobatics, aerial silks, or just aerial, this practice involves spinning, dropping, hanging, and dancing in mid-air suspended by silk bands. A trapeze may be used as well.  Think of some of the feats one might see in Cirque du Soleil.

Dr. Lorenzo told us that she likes that being an aerialist involves so much creativity. Unlike yoga, in which one must try to get the positions exactly right, aerialists can modify their own moves. “What I do is aerial dance,” she said. Being an aerialist, “involves so many things: the music, the costumes, and you have a goal” each time you practice aerial. “You want to get this move. You want to climb higher.  It’s something you can see.” 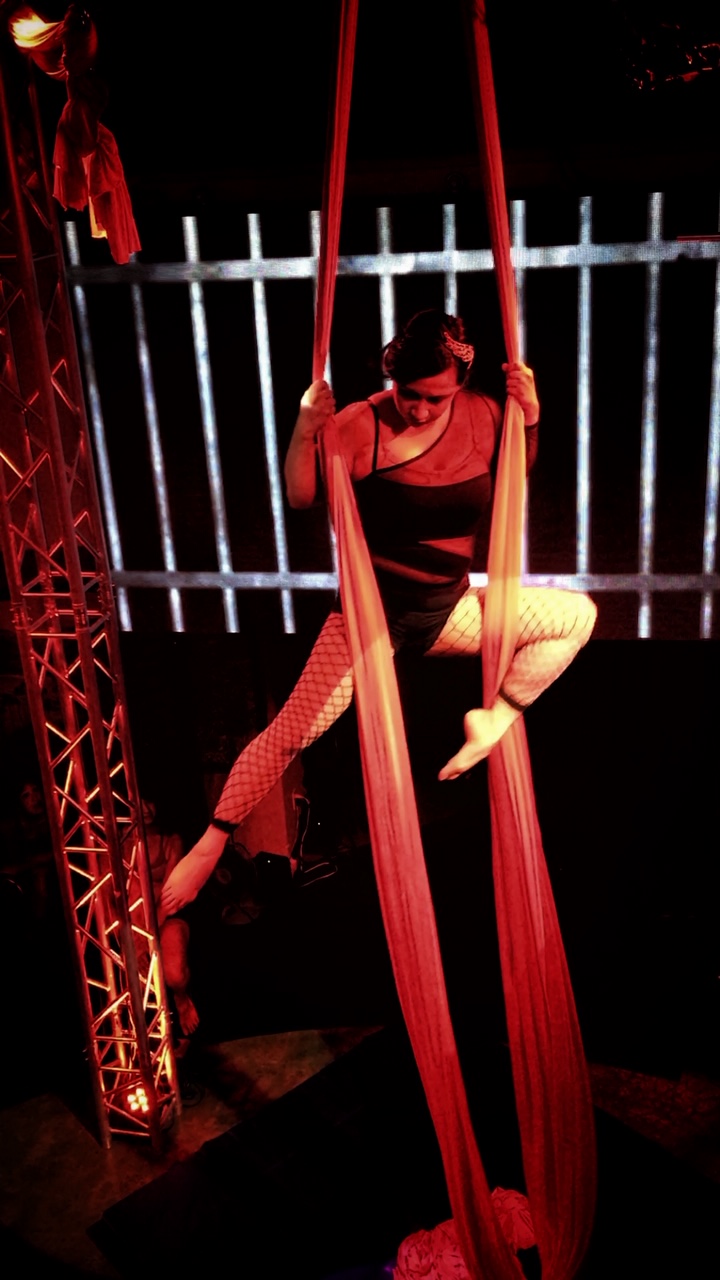 It seems that you would need to be very strong, flexible, and fit before attempting to drop, contort, and spiral through the air with nothing holding you up but a band of silk wrapped around a couple of body parts, but not so, said Dr. Lorenzo.

“I started from nothing,” she said. “I didn’t have a dance background. I was not athletic.”  This is more about body efficiency than strength.  “Body awareness” is very important, she said, “to know where your body parts are.”

Attitude is important, Dr. Lorenzo said, attitude and humility. “You have to have a good attitude because it’s very humbling. You end up some days in [aerial] class being the only one who doesn’t get a move. You keep trying.”

And what about working at such heights? Surprisingly, Dr. Lorenzo is afraid of heights.

“If you’re afraid of heights, it’s actually a good thing,” she said.

The value of a healthy fear of heights is apparent to Dr. Lorenzo when she teaches aerial to children (yes, besides being a physician, JABSOM professor, and an aerialist, she also teaches aerial to kids). “The ones that are scared are easier to teach. I know they’re not going to kill themselves,” she said with a chuckle. “The ones who aren’t scared get into accidents.  I’ve never gotten into an accident.”

As an MD, Dr. Lorenzo feels strongly that it is important for her to have something in her life to do besides medicine, to keep a sense of balance.  She talks about this to her medical students. “And it needs to be very different from medicine,” she adds.

As often as she is able, given her busy schedule, Dr. Lorenzo performs before audiences.  She learned aerial and continues to hone her craft at Samadhi, an aerial studio in Kakaako, near JABSOM, where she also performs (as she did this past Saturday). She also has joined her fellow aerialists from Samadhi in performing at events such as Art after Dark at the Honolulu Museum of Art.

“I don’t like the ‘pretty pretty’ roles,” she said, “like a ballerina.” She prefers to be “a drag queen or a fire-bird”. The following Saturday after we spoke with her, Dr. Lorenzo was planning to perform as “a she-wolf”, a role that suits her just fine.

“It’s fun, and so different from what I do in real life. I don’t have to be Dr. Lorenzo.  I can be she-wolf!” she says with a mischievous smile.

Dr. Lorenzo jokes about having a “secret identity” as an aerialist, mentioning the time she was at a performance dressed as a phoenix covered in sparkles and wearing feather eyelashes and when she heard, “Dr. Lorenzo, is that you?” and turned around to see the head of rehab at Kuakini Medical Center. “A serious guy,” she adds.

“The best thing” about aerial, Dr. Lorenzo says, “is that it becomes very social.”   She frequently mentions that the people who have learned aerial with her, who still learn and perform with her at Samadhi, have become family to her. One of whom, she tells us, started learning aerial with her when she first began and he was a young boy.  She used to lift him, she said, but now he lifts her.  He has just been accepted into Cirque du Soleil’s feeder school in Montreal. 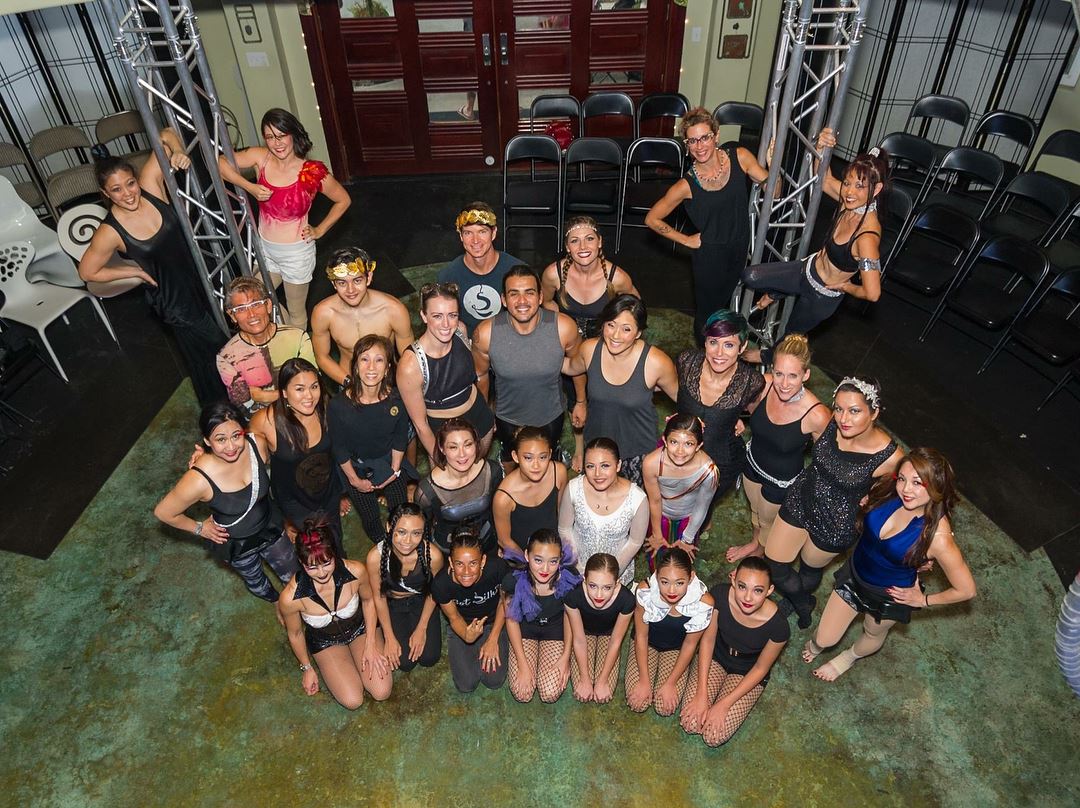 In fact, when asked what is it that has kept her going for ten years on this arduous journey, she answers, “the community,” referring to the community of aerialists who contribute so much to her life. And her regard for community and the social aspects of her experience with aerial are solidly informed by her work as a geriatrician.

“I work in geriatrics,” Dr. Lorenzo said, “and when we talk about longevity it’s not ‘Do you eat well? Do you drink green smoothies all the time? Do you work out?’ It’s about social engagement.”

Indeed, there has been a growing body of evidence which indicates that human connection in the form of meaningful relationships with others and group involvement enhances higher levels of both mental and physical functioning and longevity.  According to their website, the Stanford Center on Longevity of Stanford University has determined that “socially isolated individuals face health risks comparable to those of smokers. Their mortality risk is twice that of obese individuals.”

When we look at Dr. Lorenzo: physically active, highly socially engaged – and drinking a green smoothie as she speaks with us – we get the feeling that she will be around to care for and inspire our community for a very long time.