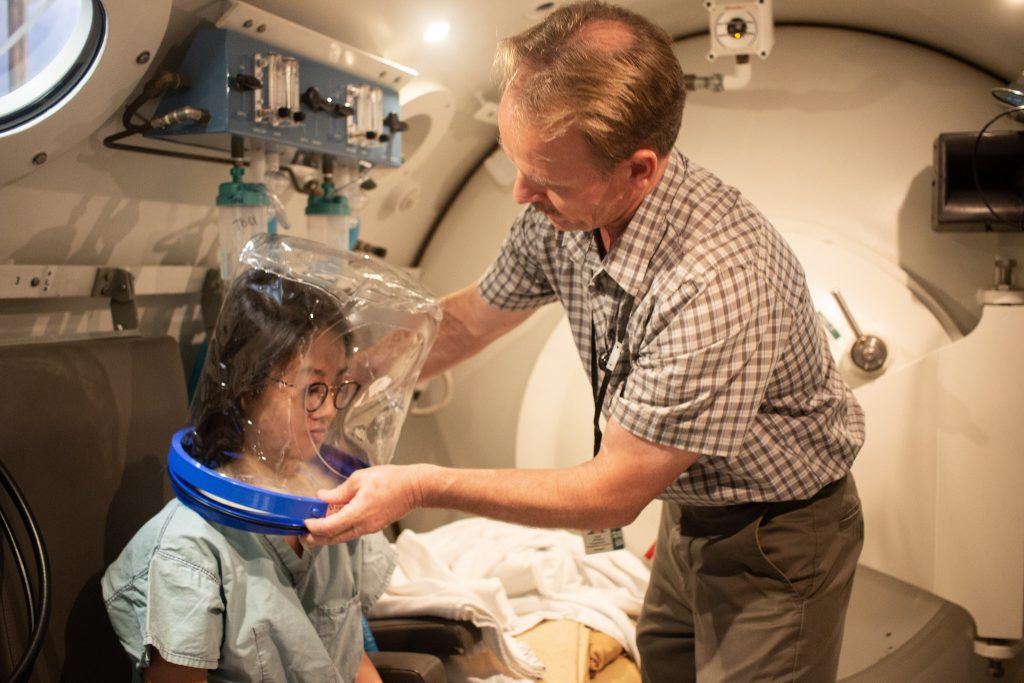 The JABSOM/UHP Hyperbaric Treatment and Wound Care Center (abbreviated as HTC) has had its fair share of accomplishments this past year. After re-opening its doors in 2018, HTC staff have made its core mission to continue providing exceptional, 24/7 hyperbaric services to the people of Hawaii and to equip and educate the next generation of medical professionals.

According to a report by medical director Dr. Susan Steinemann, HTC has had 29 emergency patients (including a critically ill patient on a ventilator) and provided over 1300 hyperbaric oxygen treatment for patients suffering from tissue damage.

Its technology has gotten an upgrade as well. A transcutaneous oximetry monitor – which is placed inside the chamber to allow real-time monitoring of blood flow and response to oxygen – was refurbished. A portable suction device was installed to facilitate patient transport. This new technology was introduced to staff — seven of whom began practicing at HTC. Two chamber operators were added to the roster, as well as five new in-chamber care providers.

HTC recently established a collaborative research project with faculty from the University of Hawaii Emergency Medicine and Surgery departments. This project, which is still in the infant stage of development, will focus on decompression risk factors and outcomes. HTC has provided four statewide grand rounds and lectures in the community this past year.

The Hyperbaric Treatment Center has also acted as a training site for 30 JABSOM students and 18 resident physicians from Nagasaki University Hospital for their rotations.

Other organizations have utilized HTC and worked with its staff to moderate emergency drills and simulations. Among these organizations including the U.S. Coast Guard, Kapiolani Community College Respiratory Care, Honolulu Fire Department and the U.S. Navy Mobile Diving and Salvage Unit (MDSU).

HTC is now accepting patients. To make an appointment, contact HTC to discuss a case with any of its hyperbaric physicians.