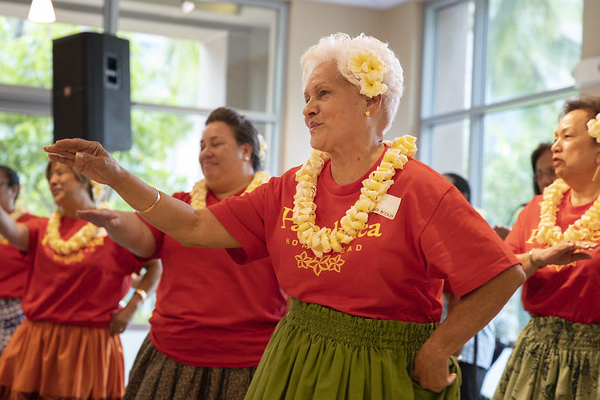 Pictured: Dancers from one of the study sites performed at the research conclusion preview for the community at JABSOM on August 23. Deborah Manog Dimaya photos.

September 8, 2019 — In findings so significant they are being presented this weekend at the national meeting of the American Heart Association (AHA), a 5 yearlong study by the University of Hawaiʻi Mānoa (UHM) medical school has found that a program to reduce blood pressure which incorporated hula produced a dramatic, lasting reduction in hypertension among Native Hawaiians.

The UHM John A. Burns School of Medicine (JABSOM) recruited 263 Native Hawaiians in nine communities on three islands. All were given three-hour sessions of hypertension education that included information on diet, exercise and the use of medications. Then, participants were randomly assigned to a control group that received no additional intervention, or to a hula intervention. 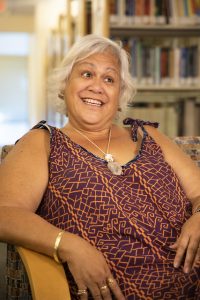 “I would have probably had a heart attack or stroke by now, because I know exactly what I didn’t do,” I didnʻt exercise,” said Arma Oana, a study participant.

“I don’t want to say I would be dead, but I would have probably had a heart attack or stroke by now, because I know exactly what I didn’t do,” said Arma Oana, a study participant. “I didn’t exercise until I came to the program. I didn’t think I could.”

Principal Investigator for the study Dr. Keaweʻaimoku Kaholokula, Chair of the medical school’s Department of Native Hawaiian Health (DNHH), said his researchers have found that Native Hawaiians want group-based and culturally relevant lifestyle interventions that resonate with their cultural values and perspectives.

“Hula is fun, it’s something you can do at an older age as well as a young age,” said Kaholokula. “It can be adjusted, modified for people with different physical capacity. You can do the Merrie Monarch competition duck walks for younger people and you can do the slower, gentle side-to-side (motion) for older folks; so I think it’s a type of physical activity that makes sense, that we can really use for health promotion.”

Co-Investigator Mele Look emphasized that more than just the hula movements was at work improving the participants’ health.

“What the kumu hula (teachers of hula) have been telling us is that hula integrates your mind, body and spirit. The hula environment creates really strong social connections between the kumu and the participant and the participants with each other, and all that together helped reinforce them to make changes in their lifestyle; maybe improve their commitment to taking their medications, inspire them to continue practicing the hula, even the stress management component — knowing you have friends supporting you,” said Look, DNHH Director of Community Engagement. “Hula is great for your health, mind, body and spirit.” 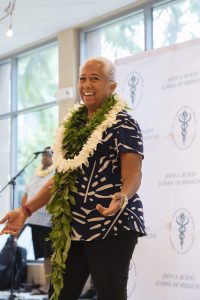 Eleven kumu hula were involved in the study, guided by Mapuana de Silva from Hālau Mōhala ʻIlimia, who partnered with the researchers. Six community organizations joined the study, named The KaHOLO Project. Before the research was presented to the AHA in New Orleans on September 7, 2019, the researchers met with participants in Hawaiʻi to inform them of the results and congratulate them on their success. 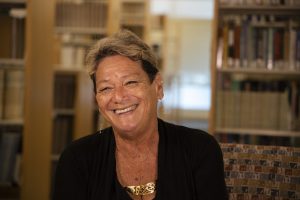 “It gets you involved with other people, it gets you moving and you’re doing your own culture,” said Luana Albino.

One of the study participants, Luana Albino of Waimanalo said, “It gets you involved with other people, it gets you moving and you’re doing your own culture.”

The study was funded by the National Heart, Lung, and Blook Institute of the National Institutes of Health. The Department of Native Hawaiian Health is the only clinical department within an accredited U.S. medical school specifically dedicated to the health of an indigenous people. Its researchers believe being asked to share their findings at the heart association convention is an acknowledgement of their work and a sign that health officials nationwide are realizing that to improve health in minority populations it helps to address those populations in ways that are culturally relevant to them, ways that meet them where they are in their communities. 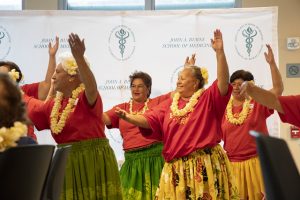 “This study is a great example of how interventions can be more effective when they are tailored for cultural relevance to participants,” said the American Heart Association’s Chief Medical Officer for Prevention Eduardo Sanchez, M.D., M.P.H. “Not only are individuals achieving health-promoting levels of physical activity, they are also having fun, engaging in a valued cultural practice, and connecting with their community in the group classes — all important for well-being. This is an approach that can easily be applied to other groups and dancing styles, such as ballroom dancing, line dancing or salsa dancing, and supports the American Heart Association’s philosophy to meet people where they are to help them live longer, healthier lives.”