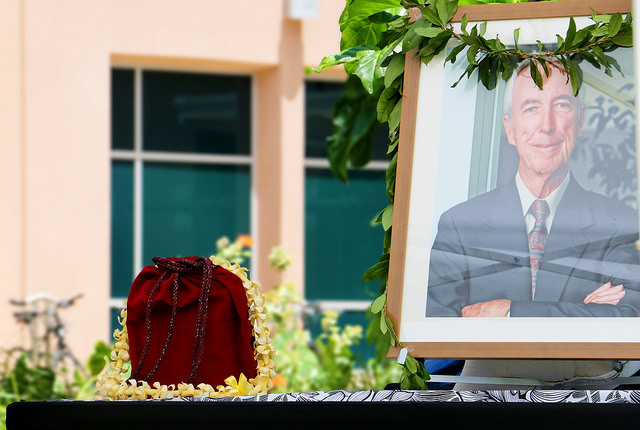 April 18, 2017 — Faculty, staff and students joined hands in prayer, remembering the late James S. Burns, longtime friend of the University of Hawai’i, during a ceremony in his honor last week. The memorial service was held in the John A. Burns School of Medicine (JABSOM) Mala Laʻau Lapaʻau, or Native Hawaiian Healing Garden, a setting where those gathered could reflect on the retired judges’ life and his many contributions in support of the school.

Burns’ widow, Emme Tomimbang, television host and producer, and James Burns’ adult children, Brendan Burns, an educator, and Meredith Burns, an attorney, attended the garden ceremony which included the planting of a lama, a tree associated with enlightenment, in the Honorable James Burns’ name.

About James Burns
James Burns, who died last month at 79, was incredibly faithful to the medical school that was named after his father, Hawaii’s former governor. Despite being a busy justice on the state’s second-highest court, James Burns attended virtually every JABSOM White Coat Ceremony, Convocation Ceremony, Dean’s Circle event and spoke to incoming students on campus every year. He offered his advice and counsel as a member of the Board of the University Health Partners of Hawai’i (formerly UCERA), the University of Hawai’i health sciences faculty practice plan, and served as president of the Friends of the Medical School, which was established to support MD students and their families. He was a trusted advisor and close friend to medical school Dean Jerris Hedges, MD.

Burns and his wife also were instrumental–with the Outrigger Duke Kahanamoku Foundation–in the establishment by Nadine Alexander Kahanamoku of scholarships in honor of Nadine’s husband, the former Olympian, Duke Kahanamoku. When Nadine died in 1997, she donated their entire estate to be used for scholarships to be awarded to medical students of Hawaiian ancestry. Since then, there have been over 80 Kahanamoku Scholars.

Our video, videotaped and edited by Vina Cristobal of UH Med Now.

Click here to view photos from the ceremony by UH Med’s Amanda Shell.