Less is More: OB/GYN doc talks about the future of healthcare 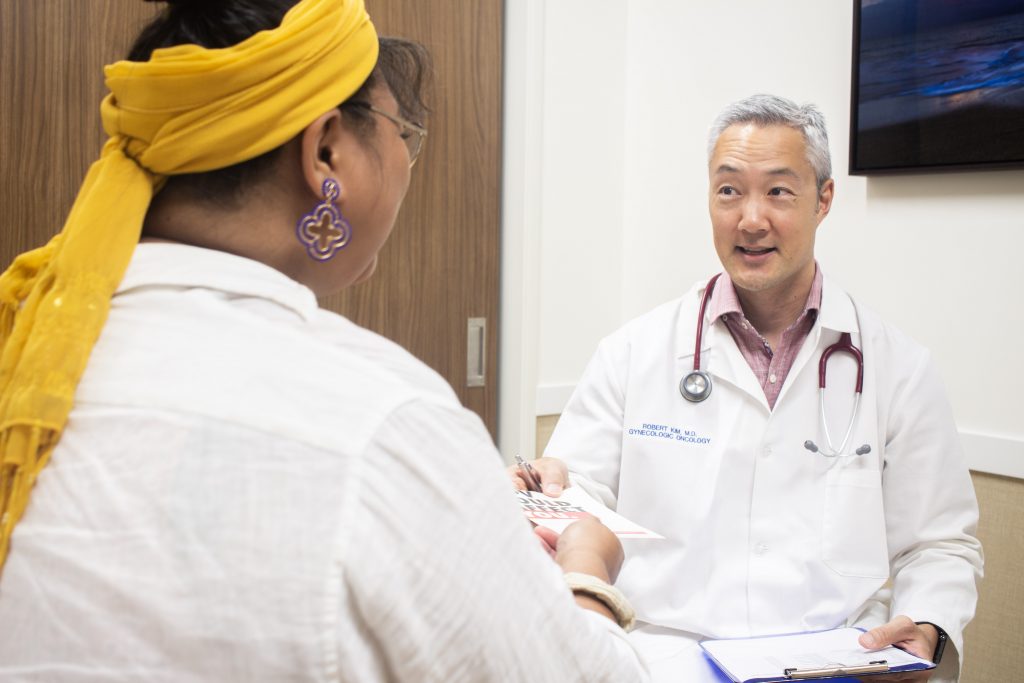 In what he describes as “a paradigm shift” in medicine, UHP’s Dr. Robert Kim tells us that these scenarios are not just a vision for the future, but increasingly, the present reality of healthcare here in Hawaii. With a less-is-more approach, Dr. Kim along with his colleagues at UHP, are helping to shape a much brighter future for those suffering from cancer and other debilitating diseases throughout the state of Hawaii and the Pacific Rim.  Regarding these changes, the individualized patient care given by our doctors perfectly illustrates the UHP motto: “Tomorrow’s Healthcare Today.”

As a gynecologic oncologist, Dr. Kim treats women with ovarian, cervical, and uterine cancer, as well as what he refers to as “complex gynecologic problems” such as endometriosis, abnormal pap smears, and fertility issues.

“We used to be super-aggressive,” in treating cancer, Dr. Kim says. That aggressive treatment often “resulted in harm, leaving people with handicaps and side effects. Now we’re into a less-is-more paradigm which doesn’t mean cheaper or more restrictive service. It’s recognizing that we can still achieve cures with less.”

“The big open surgeries of the past often resulted in large wound infections and other problems,” Dr. Kim explains.  Patients now “recover quicker” in part because they are left with “little puka incisions” instead of large wounds.

Another major change in healthcare, he says, is that “multiple therapies” are employed in the treatment of cancer. “Whereas we used to have a heavy reliance on chemotherapy, other, better targeted therapies are now being used.”  We are seeing “a recognition that all cancers are not the same. You might have ovarian cancer, and the person next to you might have ovarian cancer, but that person might not have the same type of cancer as you.”

Dr. Kim also tells us that “the world of 23 & Me and Ancestry.com has entered the medical world too. We’re analyzing cancers now to the basic building blocks of genetics.” They are looking at differences in mutations and tumor types and developing targeted medications that are making a big difference, especially the field of gynecologic oncology.

Dr. Kim says what he is most proud of is that when he started practicing medicine in Hawaii, if patients from a neighboring Island or West Oahu wanted to see him or another specialty doctor, they would need to travel to him.  Over the past several years, and specifically in the past year, Dr. Kim has been helping to bring about what he calls “decentralization” of specialized treatment, “where you’re not coming to us. We’re coming to you.”

Dr. Kim explains that we know that when patients are near their homes, they are near family who can make them more comfortable and participate in their care.  “They do better,” he says. “Yes, maybe it’s less convenient for me to fly to Hilo, but it’s one plane fare and I can see 20 patients versus having 20 people fly here.”  He says this is what he’s been “hoping for, waiting for – delivering health care to people in the community.”

He mentions UHP’s new clinic in Pali Momi, as well UHP’s new gynecologic practice in Hilo, and adds, “We’re already servicing Maui. Eventually we’d like to serve Kauai.”  But he is quick to say that these communities do have good care in place already. There are very good gynecologists on the Big Island, for example, but most of the specialists were in Honolulu. Now UHP is bringing specialists, like Dr. Kim, to Hilo.

Dr. Kim also talks about the decentralization of cancer centers.  There used to be just two big cancer centers on the island, at Kapiolani and Queen’s, but now we have two on the leeward side as well: one at Pali Momi and a center at Queen’s West Oahu. And instead of being “cold sterile places where you go to have drugs infused in your body, they are offering alternative therapies like Reiki, healing touch, pet therapy and acupuncture.”  They offer lodging for outer island patients and support groups as well.

“Are we seeing a future where there is no need for surgery because the treatment for cancer is so good?” Dr. Kim asks.  “One day are we going to see that we’re not using our standard chemotherapy regimens because we now have new therapies? I don’t know what the future is going to be, but the future is bright.”