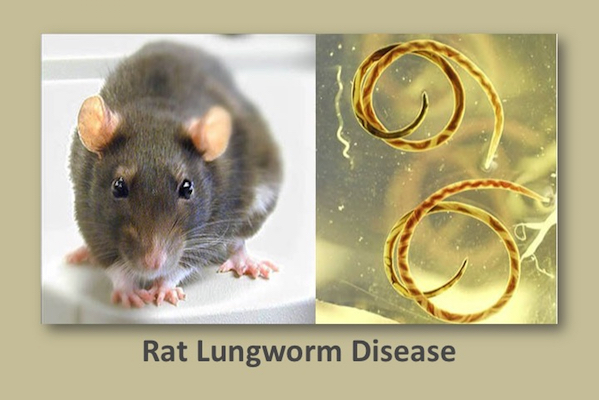 Did you ever think that eating a salad made of lettuce from your very own garden might kill you?

From time to time we hear about a type of produce that has somehow become contaminated and unfit for human consumption.  You might think the safest way would be to grow your own vegetables in your backyard. But you may want to reconsider that option.

Angiostrongyliasis, or Rat Lungworm Disease (RLWD), is found throughout the world, but nowhere is it more prevalent and more virulent than in Hawaii, and it’s growing and spreading at a rapid pace.  RLWD attacks the brain and spinal cord and is caused by a parasitic worm found in rodents which pass the larvae of the worm in their feces. Slugs (in particular, the semi-slug, a very small half-slug/half-snail that likes to climb) snails, frogs, and some other animals serve as intermediate hosts of RLW when they ingest the larvae. Humans can become infected with RLWD when we eat raw produce that is contaminated by one of these hosts.

The symptoms of RLWD are debilitating and painful. And for most people who have this disease there is no recovery.  Those infected often die from this hidden danger which is rapidly spreading in the soil of our Islands.

Recently, UHP became involved in a project to educate people and spread awareness of RLWD. After several unsuccessful attempts to secure funding for these efforts, Kathleen Howe, an internationally recognized authority on RLWD, was told that she and her team could use funds from the State Department of Health (DOH) to educate people in Hawaii about this disease. UHP was called upon to manage the funds for this project.

Do an online search of Rat Lungworm Disease and you will see the name Kathleen Howe. Before she became an authority on RLWD, Kathleen taught language arts, art, and math to children at charter schools on Hawaii Island. In 2008, her son became ill with RLWD. From that day forward, Kathleen’s life shifted to one spent caring for her son, researching RLWD, and educating the rest of us about this devastating illness.

Kathleen describes her son’s illness as unfolding into a “cascade of problems” that are characteristic of RLWD.  A loss of balance was one of these problems. He couldn’t walk. “He couldn’t even turn himself over in bed,” she says. He had even gone into a coma. “Every doctor told me to pull the plug. They said that he would never recover, that he would never open his eyes again.”

As Kathleen describes it, RLWD also tends to bring on “horrible serious pain” and an extreme skin sensitivity “that doesn’t go away”.  There’s a “pins and needles” sensation in which the skin becomes “really really sensitive to anything – even hair brushing on it.” Loss of vision and hearing, bowel and bladder issues, digestive problems, diarrhea, vomiting, exhaustion, and acquired brain injury are among the symptoms.  “There’s a whole list of weird stuff,” Kathleen says.

Kathleen’s son has not had a full recovery. He still has problems with double-vision, balance and insomnia, as well as some cognitive issues, but “overall,” Kathleen reports, “he’s doing incredibly well.”

Kathleen relays a story about family on the Big Island who picked lettuce from their garden, washed the lettuce leaf by leaf, spun it, and served it in a salad. When they got down to the bottom of the bowl, they saw a semi-slug.  They had it tested at UH’s Jarvi Lab and found that it was indeed “very infected” with RLW.

Infested slugs have also been found in the water catchments in Hawaii. Large areas on the Big Island rely on rainwater catchment for their water source. Slugs tend to crawl into these catchments and contaminate the water supplies with RLWD.  Kathleen and the team of researchers she works with have found that slugs, especially semi-slugs, shed parasites as they drown in water.

Kathleen’s struggle to educate people about RLWD really took hold in 2011 when she was speaking about her son’s case at a conference where she met Dr. Susan Jarvi of UH’s Daniel K Inouye College of Pharmacy in Hilo.  Professor Jarvi is the head of the Hawaii Island Rat Lungworm Working Group. Her lab, The Jarvi Lab, has two main areas of investigation:  avian pathogens and rat lungworm disease.  It was in this meeting that Kathleen decided to return to school to get her Masters of Science Degree in Tropical Conservation Biology and Environmental Science from UH’s College of Pharmacy with Dr. Jarvi as her advisor. It was also there that she and some others came up with the idea to start a program for educating people about RLWD in isolated rural areas on Hawaii Island where RLWD is most prevalent.

Working in collaboration with the Hawaii Farm to School Garden Hui which oversees school gardens in Hawaii, Kathleen and her team went into K through 12 classrooms and talked to students about the pests that carry RLWD. They showed students how to identify slugs and snails by trapping them “in shelters” in the gardens.  They developed a curriculum on RLWD consisting of lessons based on what they learned in that pilot program. All of the educational materials are now available online for no charge.

Through a grant from the Hawaii Community Foundation they were able to develop a Department Of Education approved, for-credit Professional Development Educational program for teachers.

Then using the DOH funding managed by UHP, she said she “blanketed the state” in June, 2019 teaching one-day workshops for teachers and others and working with the Hawaii School Garden Hui and the Hawaii School Garden Network on educating students about this issue.  Participants learned how to make “slug jugs” and other methods for trapping and disposing of the pests that host RLWD.  The teachers and community members went back to their communities to work on controlling slugs. Their goal was to collect data so we can better understand population dynamics and how effective control efforts are on populations.

Now that this project is finished, she said, “We’re looking for more funding to keep doing this. There’s been a lot of interest from teachers and community members to continue it.”

How can you avoid RLWD? “We tell people, don’t eat raw food. Wash your food well and cook or freeze high risk vegetables. Freeze foods, such as kale, for 48 hours,” Kathleen advises. “Try blanching kale, chard, beet tops, and then chilling and serving in a salad. Also, washing and then drying with a towel, fruits and vegetables such as tomatoes, peppers, cucumbers, avocados, etc., can help prevent the disease. The RLW parasite does not do well in dry conditions and perishes rather quickly. ”

Kathleen said that she’d like to send “a big mahalo to UHP” for all the help and support she gotten from our organization. “You guys are wonderful to work with. If we get a funding bill through, we might be working with you again!”

And if she is successful in her goal, Hawaii surely does have her and the people at UH’s Jarvi Lab to thank for their heroic efforts to keep us informed and safe from Rat Lungworm Disease.