“The relationship that is very tight”: Dr. Kalani Brady finds ‘ohana in his Kalaupapa patients 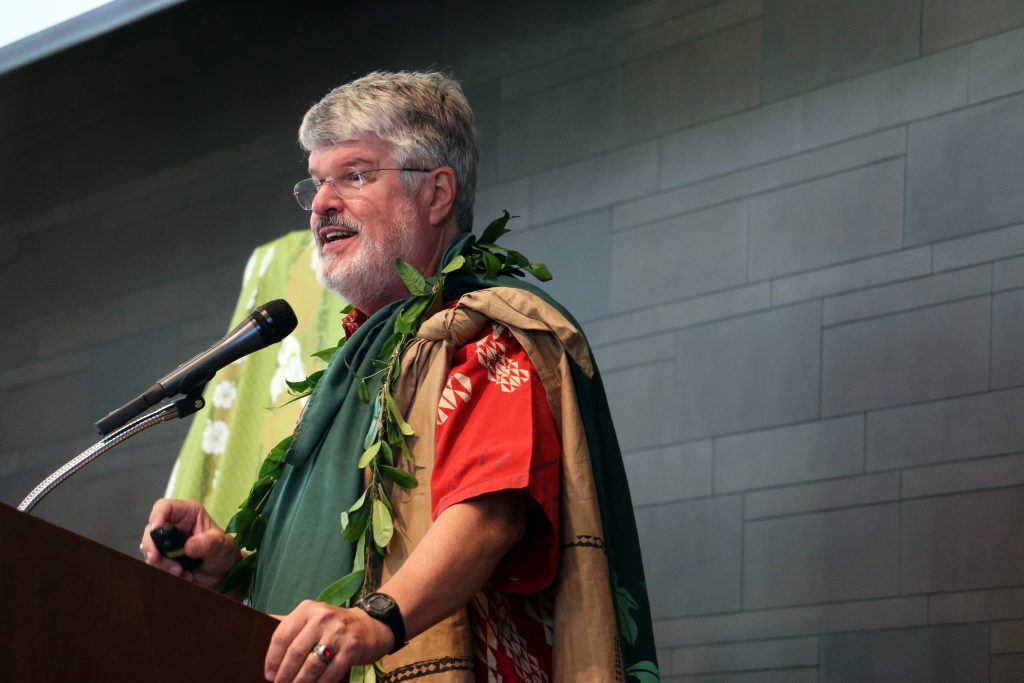 Written by Marybeth Kotrodimos
Featured photo: Dr. Kalani Brady speaks at the 2017 JABSOM alumni reunion. He is dressed in his formal kīhei, a garment symbolizes his profession as a Native Hawaiian physician. Amanda Shell/JABSOM photo.

There are few long-time residents of Oahu who have not heard of Dr. Stephen “Kalani” Brady of University Health Partners of Hawaiʻi (UHP) and the University of Hawaiʻi’s John A. Burns School of Medicine (JABSOM). The list of his accomplishments and awards seems endless.  Many people in Hawaii know him as the doctor on the KHON2 Wake Up 2Day news segment Ask the Doctor which airs every Thursday morning.   Of course, he has touched the lives of many, but there is one group in particular who stands out among the many grateful patients of Dr. Brady:  The Hansen’s Disease patients in Kalaupapa.

From 1830 through the 1960s people in Hawaiʻi with Hansen’s Disease (the preferred term for Leprosy) were sent to Kalaupapa, a peninsula on the Island of Molokaʻi, to live out their days, isolated from the rest of society.  Less than 12 of the 8,000 patients sent to Kalaupapa are left there, and Dr. Brady has been caring for them for nearly 19 years.   Dr. Brady begins the story of his work with Hansen’s patients by telling how they came to be on Molokaʻi.

“In the 1830’s,” he begins, “merchant seamen, whalers and other sailors came to Hawaiʻi in the addition to the missionaries to help, in their way, the Hawaiian people that lived here. At that time, there were 300,000 to 800,000 Hawaiians according to historians who did the count.”  These newcomers to Hawaiʻi “brought with them a large number of diseases which became epidemic because Native Hawaiians were immunologically virgin to things like influenza, plague, measles and other diseases that had been in the Haole population” of their native New England.  As a result, their numbers “went down to less than 100,000 by the 1850’s.  And then came another epidemic:  Hansen’s Disease.”

Generally, when Hawaiians caught the other diseases brought by the newcomers, they “suffered for several days to a week and then frequently died,” Dr. Brady tells us. Hansen’s patients did not die from the disease but “it turned your body into a monstrosity.  Imagine your soul inside is unchanged, but you like an ogre on the outside and people shunned you like they did in the Bible.”

According to the CDC, Hansen’s Disease “can affect the nerves, skin, eyes, and lining of the nose (nasal mucosa).” If left untreated there may be loss of fingers and toes, blindness, deterioration of the skin, and “loss of eyebrows and saddle-nose deformity resulting from damage to the nasal septum.” https://www.cdc.gov/leprosy/index.html

The kingdom government, King Kamehameha V, and his medical advisors decided to quarantine the Hansen’s patients in Kalaupapa because the cliffs surrounding it are 1,800 feet high, “making it a potent barrier, especially for the infirm trying to escape.”

Then, in the 1860s, because Hawaiʻi had no quarantine law, “they adopted the penal code and if you were suspected of having Hansen’s Disease, you were arrested, tried in Honolulu by a group of physicians – mostly from Europe, and if convicted (and they absolutely used those words in the Hawaiian revised statutes) you were sentenced to life imprisonment in Kalaupapa.”

In1969, the quarantine law was repealed and the Hansen’s patients were free to leave. Most of them had been sent to Kalaupapa when they were between the ages of five and twenty years old, Dr. Brady says. Because of the stigma and fear of Hansen’s, sometimes their families would abandon (“or hoʻokai”) and disown the Hansen’s patients. “So as the community in Kalaupapa grew, it became the only family they had. There were rare exceptions in which spouses would go voluntarily to Kalaupapa recognizing that meant a life sentence to care for their loved one, and frequently they would get Hansen’s themselves.”

After the quarantine law was repealed, many in “the outside world were petrified of [the Hansen’s Patients] and reviled them, so most of them opted to live in Kalaupapa for the rest of their lives and now the people who live in Kalaupapa – less than a dozen – are the remnants of the people” who had been sentenced there so long ago.

In 2003, Dr. Brady was asked by a physician family member if he’d like to care for the 40-50 Hansen’s patients left in Molokaʻi at that time. “We need Hawaiians to take care of them,” he told Dr. Brady, who traces his roots to the Keli‘ikanaka‘oleaipolani family from Kaua‘i. At first, “I was afraid that in this very insular community of Hawaiʻi, because I was raised in Kailua, I would be seen as an outsider and wouldn’t be trusted,” Dr. Brady said. But when Dr. Phil Jones, Dr. Brady’s retiring predecessor at Kalaupapa, took him around to meet the patients, he found that they already knew him.  It turned out that on Thursday mornings, he says, “the patients in Kalaupapa would wake up, turn their TVs on, get dressed and do their ablutions while watching me. So when Phil Jones took me around to introduce me, the patients said, ‘Oh, Kalani Brady? We know Kalani!  That will be fine’ and thus was born the relationship that is very tight.”

At that time, Dr. Brady said, “we fashioned a contract between UCERA (now UHP) and the State of Hawaiʻi Department of Health (DOH) that we use for the doctors that care for the patients of Kalaupapa.” He has “arranged the DOH contract through UHP all these years.”  After that, he traveled to care for the patients twice a week, staying in a house that the DOH provided for him.  Now, due to COVID, he travels there once a month.

Dr. Brady speaks with pride and affection about his relationship with the people of Kalaupapa. “I’ve watched them live and I’ve buried them. The last ones that are left are – average age – almost 90.  They have the same diseases that aged people often have. On top of that, they have Hansen’s and diabetes, which work together as a one-two punch to really make them sick, so the patients really suffer.”

Dr. Brady said he is “honored to be a part of that community. I traveled with them for the canonizations of Father Damien and Mother Marianne in Rome and took care of them on the pilgrimage. We did a lot of traveling together when they were younger.”

Due to the COVID pandemic, Dr. Brady said, he no longer takes groups of three or four medical students on overnight trips to Molokaʻi, a practice he said was “very important” to him, “so they could experience the sacred place of Kalaupapa.”

Due to the cost of keeping the patients there, periodically there is talk in the state legislature of removing them to a nursing home in Honolulu. That is when, Dr. Brady says, “we remind them that it wasn’t their choice to be quarantined and basically sentenced to life in prison in Kalaupapa. That is the only home they know. The legislature has backed off and basically does not push right now, though economic times being what they are, one might predict there’s going to be another battle to remove these people from the home to which they were sentenced. To remain there, that was the promise.”

The CDC estimates that there are about 150 people who have Hansen’s Disease in the US and about 250,000 new cases worldwide. According to their website, these days the prognosis for Hansen’s patients is not nearly as dire as it once was.  “Early diagnosis and treatment usually prevent disability that can result from the disease, and people with Hansen’s disease can continue to work and lead an active life. Once treatment is started, the person is no longer contagious.”

But according to Dr. Brady, although this is true, there is no real cure for Hansen’s.  “Most healthcare specialists won’t talk about curing Hansen’s. They talk about arresting Hansen’s. It can be controlled.”

It is also true that along with more effective treatment, there is Dr. Kalani Brady, who has devoted so much of his life and work to helping the people of Kalaupapa, as well as the rest of us in our Island home. Along with the other dedicated doctors of University Health Partners of Hawaiʻi who have cared for all of our Island ohana, we owe him much gratitude.  Mahalo nui loa, Dr. Brady!