#WeAreUHP: Allen Yadao - A Triumph of the Human Spirit 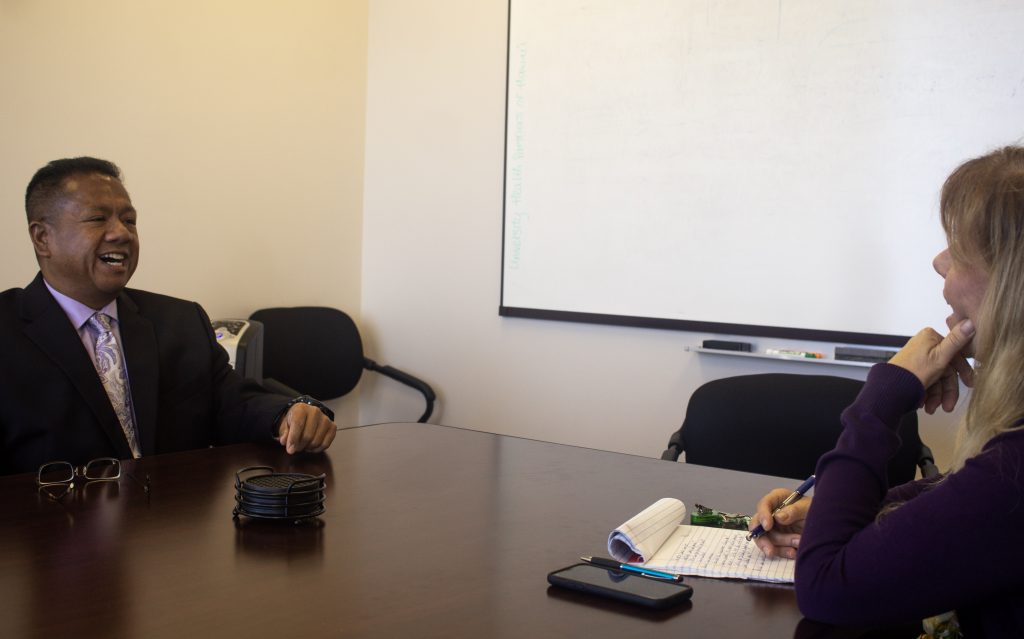 One such person who brightens our world here at UHP is our Contracts and Compliance Specialist, Allen Yadao.  Many of us who work at UHP are familiar with Allen. He’s the former prosecuting attorney with the hundred-watt smile and a big greeting for everyone he sees.  His welcoming, generous nature is apparent in so many ways. Sometimes it manifests in the form of food – like when he surprised us at Central with enough Lee’s custard pies to give each of us a slice.  He’s funny too – like when he entertains us by singing Bobby Brown songs “opera style”. It’s hard to imagine a more positive person.

Indeed, it would be very difficult to maintain a negative outlook around Allen.  If nothing else, he will make you laugh your way out of it. Always willing to help, always grateful for any help you give him, hard-working and dedicated, but friendly and kind to all – that’s Allen.

Though it seems to come naturally to him, Allen didn’t always greet life with such exuberance. His positivity and gratitude came at a high price. Back when he was Deputy District Attorney, his focus was on winning cases, and as he says, “locking up as many people” as he could.  As a prosecuting attorney, he measured his success by how many cases he won, and he won a lot of them. When talking about those days, Allen paints a picture of himself as an ambitious and hard-working person.  But in August 2013, something happened that would change all that. And it began with an attack of gout.

Allen says that he is grateful for the oxtail soup he was eating that brought on an excruciating pain in his knee, which led him to his doctor’s office for treatment.  Fortunately, his physician ordered a full blood test which revealed something else far more alarming, something which changed his life forever: Allen was diagnosed with Hairy Cell Leukemia, a very rare, slow-acting, chronic form of cancer. He says that he thought his life “would be over by November. No more Christmas, no more Thanksgiving.”

A week after getting his diagnosis, Allen saw a specialist, who ordered a bone marrow test, an extremely painful procedure.  Then he began a treatment called infusion. For ten days, Allen needed to keep a very long needle in his arm (Allen demonstrates its length by holding two fingers about three inches apart) attached to a pump that dispensed medication.

What followed was a long period of pain and spiking energy levels, as well as weekly trips to his doctor’s office for blood tests.  When asked what got him through this ordeal, without hesitation, Allen replies that it was his parents and his faith in God.

When we asked him if we could interview him for this article, Allen asked if his parents could join us, and they did, dressed, as Allen was, in purple, the color designated for leukemia.  Their pride in their son, the successful lawyer who had survived cancer, was evident in their faces. He credits them for his becoming a lawyer, and for the fact that he is strong and healthy enough to be here with us today. 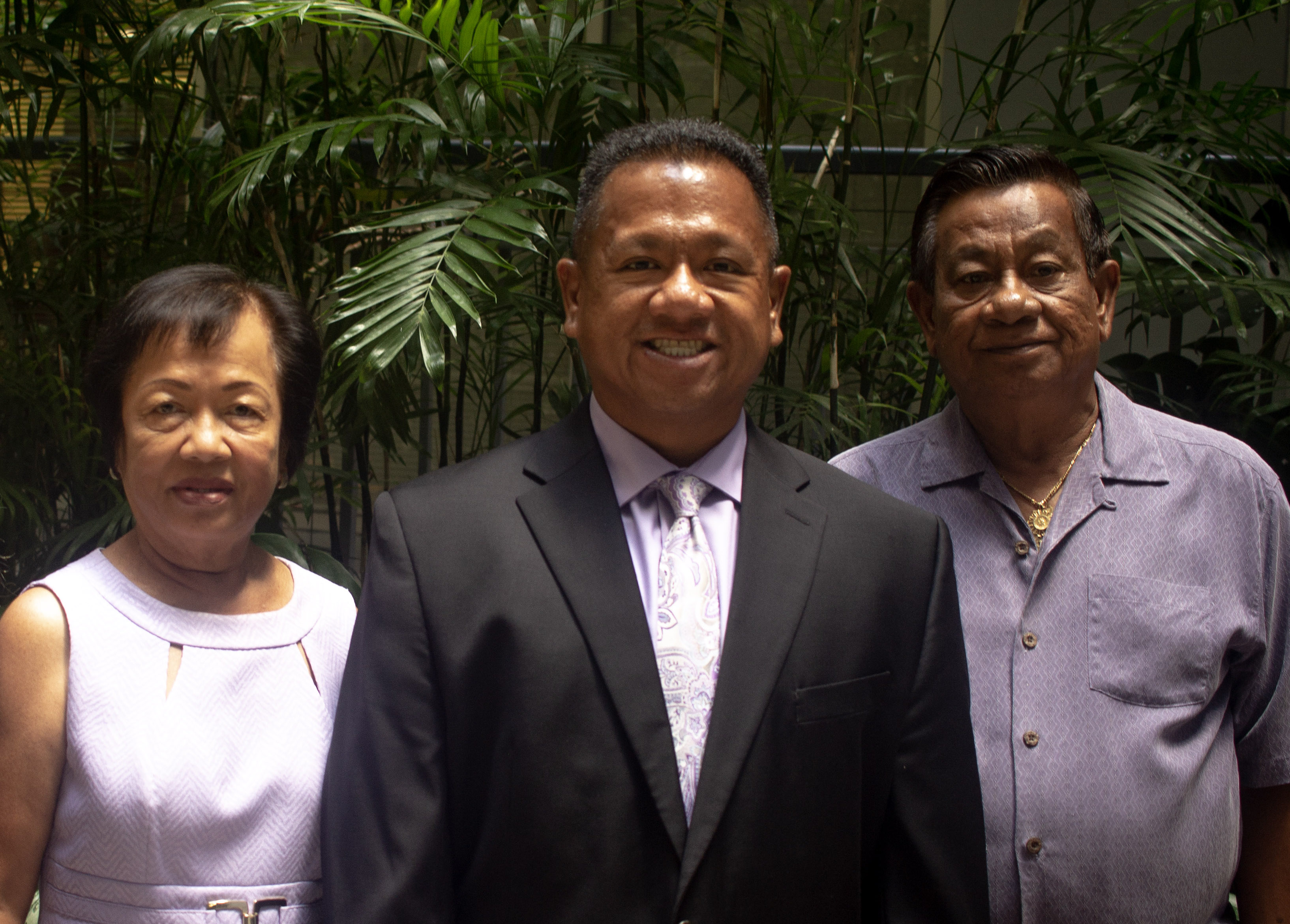 When Allen talks about his struggle with cancer, his mother and father figure prominently in his story.  He speaks with abundant gratitude about how they prepared food for him, and how his father rearranged his work schedule to accommodate taking him to doctor appointments and to have his blood tested since Allen was unable to drive while he was undergoing the infusion. Most importantly, he said, “They kept my spirits up.”

That couldn’t have always been easy.  “I was afraid to go to sleep because I was thinking that if I close my eyes, I won’t wake up again,” he said. But then Allen found that he started to gain a kind of peace as he realized, “If it’s time for me to go, it’s time for me to go. I’m going to spend the last days with my parents who love me a lot.”  He started doing things he had always wanted to do, but never did when he was working 12-15 hours a day as a prosecuting attorney.

“I started buying basketball jerseys,” he said, and spending more time with his niece, “playing hide-and-go-seek, watching cartoons on TV.”

Prior to getting sick, he said, “I wanted to be the best prosecutor I could be. Not to brag, but I was at the top of my game, on the way up. Consumed. My whole mentality at the time was power, prestige, having a deputy prosecutor title, making money.”

Here Allen grows uncharacteristically quiet after he asks, “Was I happy?” And as he answers this question, Allen’s parents nod knowingly.

“I missed a lot of time with family, a lot of joy and time with loved ones.” These days, Allen says, he tries not to let little things bother him. “I know what’s important now.”

Ironically, this more relaxed approach actually helped Allen become a better prosecutor.  Before his diagnosis, he said, he’d ask for jail time or a higher fine for every violation that he prosecuted, even, he said, something as minor as “someone sleeping in a closed park.”  But after getting cancer, he wasn’t so adamant about prosecuting for these types of lesser offenses. He started putting his energy into cases that involved more serious crimes.

“It made me more selective,” Allen said. “I actually became a better prosecutor. I picked my battles and fought crimes that really matter, the assaults, the harassments.”

Something else that helped Allen was that no one pitied him.  “It was never, ‘Aw, poor Allen,’” he said. People assured him that he was strong and would prevail over cancer. A colleague told him, “Cancer doesn’t know what it’s messing with.  It’s messing with one of the toughest deputy prosecutors on the planet.” From those around him, he got “not pity, but support. Support is good energy,” Allen said. “When you get support, your body responds, everything responds. It all goes into play, and you feel the strength within you.”

Allen’s recovery did not follow a straight course. In 2013, he learned that his cancer was in remission, but found out in 2015 that it had returned. So for the next three years, up to the present, he has had to go to the Queen’s Cancer Center one day a week for four weeks in June and December for treatment which left him unable to participate in the festivities of the holidays.

“No Christmas parties, no company parties,” he says, shaking his head. But as of November 13, he got good news: for the first time in three years, he is currently in remission. The cancer has left him. He will finally be able to attend the UHP Central Christmas party, something that makes his wide smile grow even bigger.

“I love working here,” he said, and it shows in the myriad ways he lifts our spirits.

For Allen and for those of us who know him and his story of illness, recovery, and gratitude, our holidays just became happier.

Mahalo, Allen, for all you contribute to our ohana!  The news of that your cancer is in remission is a wonderful holiday present to all of us.

Our UHP ohana is full of interesting people – people who are downright amazing, in fact! What makes them amazing is often not apparent, but maybe we can shine a little light on them and show some much-deserved appreciation for the unique and wonderful individuals who make up our world here at UHP.  And so, each month we would like to share one of their stories with you here.

Do you know someone with an interesting background or hobby, or someone who goes the extra mile to help make our world a better place? Please let us know about your newsworthy co-workers by emailing vcristobal@ucera.org or mkotrodimos@ucera.org.)