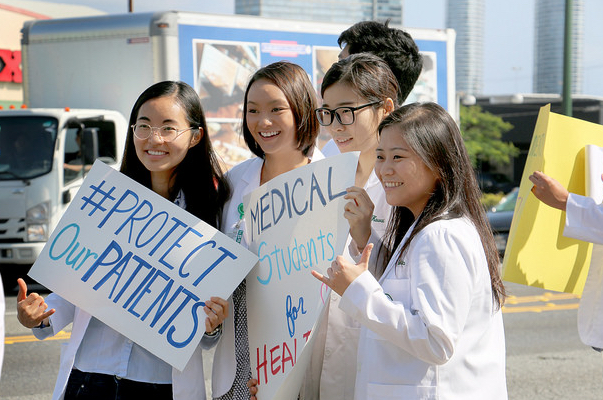 March 13, 2017 — The John A. Burns School of Medicine (JABSOM) is among the top medical schools in the country in several key areas, according to newly released data from the Association of American Medical Colleges (AAMC).

The University of Hawaiʻi medical school excels in the number of its graduates who enter training in primary care medicine. JABSOM placed better than 90% of all other accredited medical schools in the percentage of students choosing primary care.

JABSOM also is very strong in retaining its graduates after training to practice in Hawaiʻi, performing better than 75% of other medical schools in North America at generating its state’s own MD workforce.

Both the number of students who choose primary care specialties and the number who remain or return to treat patients in Hawaiʻi after their training are critical to stemming the growing shortage of physicians in the state.

“With Hawaiʻi some 500 physicians short of the number it should have for its population, we are exceedingly pleased that JABSOM continues to show sustained growth in producing the kinds of doctors we need the most – those in primary care – and that a significant percentage of the doctors we train stay here in Hawaiʻi to practice,” said Jerris R. Hedges, MD, Professor and Dean.

Additionally, JABSOM is in the top 15% of medical schools whose graduates intend to care for underserved (poor or disadvantaged) patients. JABSOM also ranked near the top for its diversity among MD students and faculty and in providing learning experiences that include emphasis on cultural competency and health inequities.

The AAMC data also shows value for Hawaiʻi families. Almost nine out of ten JABSOM students are kamaʻaina, and they graduate with less medical student debt than that carried by students at 90% of U.S. medical schools.

On average, just over 11% of JABSOM MD students are of Native Hawaiian or Pacific Island descent

Top 9% of schools as judged by each school’s graduates

JABSOM is in the top 23% of schools, with almost half (45.5%) of its graduates practicing in state within 10 years (to fully account for out-of-state post-MD school training and relocation factors).

JABSOM is in the top 15% of medical schools preparing students to meet the needs of the community for underserved care, with 35.2% of JABSOM graduates intending to care for underserved patients.