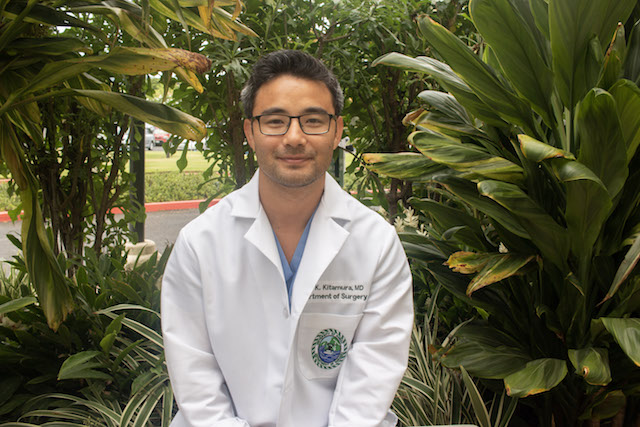 Dr. Riley Kitamura was on the admissions waitlist at JABSOM. Now, he teaches there.

After graduating from Punahou School and the University of Southern California with a Biomedical Engineering degree, Kitamura hoped to study at the University of Hawaii medical school, where he eventually became a lab assistant. But due to limited funding and the small class size (it was 62 when Kitamura initially applied in 2007), he was among many hopeful applicants who ended up on the waitlist.

He went on to work as a full-time MRI research technician and data analyst for Dr. Linda Chang at Queen’s Medical Center. Kitamura also sought mentorship from physicians at the hospital and developed his appreciation for surgical specialities. In the operating room, he became fascinated by the technical expertise and efficiency of the surgeons. To this day, Kitamura is still “honored to do this type of medical work.”

Two years had passed, and Kitamura was eventually accepted into the Icahn School of Medicine in New York City.

“I was thrilled to go to New York because I wanted to challenge myself and learn in a diverse, major metropolitan city with leaders in the medical field,” Kitamura said. “It was a chance to get outside my comfort zone and grow personally and professionally.”

His experience on the East Coast was positive, adding that New York was an “exciting place to live and train.” The obvious trials of medical school and residency were present, but Kitamura felt that those challenges equipped him in his professional career.

As a bonus, life-long friendships were established during his medical school years; in fact, the best man at his wedding was a former classmate of his.

Kitamura received his medical degree in 2013 and finished his surgical residency at Icahn in 2018. In his third year of training, he developed an affinity for hepatobiliary surgery (which deals with the liver, bile duct and pancreatic areas), pediatric surgery, and minimally invasive surgery.

But the feeling of home beckoned him from the other side of the country.

“At this time, some of my family members were married and had kids, and others sadly passed away,” Kitamura said. “I missed all of it. With my then-girlfriend – now wife – we decided to make a purposeful effort to return to the islands, and focus on achieving a healthy balance between our personal life and medical careers.”

In 2018, Kitamura was accepted into a fellowship program in Advanced Gastrointestinal and Minimally Invasive Surgery at the Veterans Administration Hospital in Palo Alto, CA in 2019. His program was a short drive from the Intuitive headquarters, which is where the Da Vinci Surgical Robot was developed. This was ideal, as Kitamura was planning to return home after his fellowship.

“The goal was always to gather what I could learn abroad, and return home to give back to the community that once supported me,” he said.

Not only that, he found out that Dr. Kenric Murayama, a 1985 JABSOM alumnus, returned to his roots in Hawaii to become the medical school’s Department Chair of Surgery.

“It’s important to find a good mentor early in your career,” Kitamura said. “That’s a big reason why I wanted to come back.” He explained that he felt an ‘instant connection’ with Dr. Murayama, who was also commended by Kitamura’s residency director.

“I think the most important part of mentorship is trust.  At this point in my career, I do not need a ton of oversight–but I know that if I ever need help, Dr. Murayama and the rest of those in our practice, would be at my side at a moment’s notice.  Inevitably, I will face challenges in my professional and/or personal life that I will not know how to navigate. However, I have no doubt that with this type of support, we will continue to grow and be successful. Working in this type of environment is, frankly, thrilling.  It also provides me with a framework for professional growth, and how I will interact with and mentor those in the next generation of physicians.”

Following in the footsteps of his mentor, Kitamura returned to Oahu after nine years of training on the mainland. In August 2019, he began his role as an Assistant Professor of Surgery at JABSOM, his first choice medical school. His wife, Melissa, is a pediatric pharmacist.

“I am thrilled to work at University Health Partners of Hawaii, where our patients constantly tell us how much they appreciate having our services in their neighborhoods,” said Kitamura, who currently practices at the UHP Surgery clinic at Queen’s West Oahu. “[As an Assistant Professor of Surgery], teaching residents and medical students has been a pleasure. They really bring my experience full circle and make the hospital a wonderful place to work.”