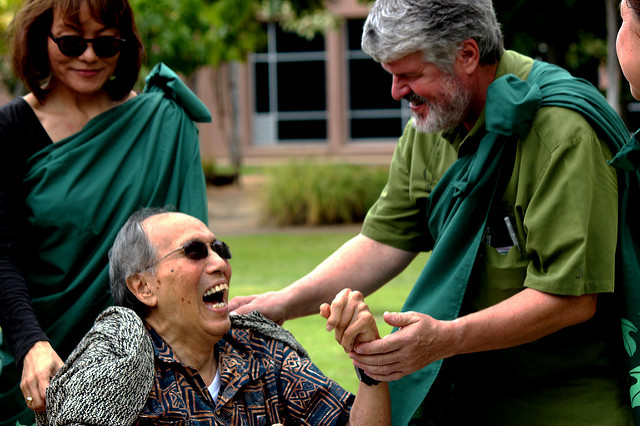 July 28, 2014 — More than 10 years ago, Dr. Kalani S. Brady, an associate professor of the Department of Native Hawaiian Health at the John A. Burns School of Medicine and a physician with University Clinical Education and Research Associates (UCERA), made a commitment that became a pivotal point in his medical career.

Brady, along with a hui [group] of physicians – including fellow Native Hawaiian Health doctor Martina Kamaka – banded together to provide medical assistance to the people of Kalaupapa, on Moloka’i Island, known for its remote nature and its history as a former leprosy colony.

“Ten and a half years ago, my hanai [adopted] cousin Emmett Aluli, basically contacted me,” Brady said. “We were working on research on topside Molokai and she said, “Kalani, we have to have a hui [group] of kauka [doctors] of Hawaiians to take care of the Hawaiians that are down in Kalaupapa.” And so I put together a hui, a group of Hawaiians, to go down and care for the Hawaiians down there with Hansen’s disease. And so about 10 and a half years ago, we started.”

Brady was tentative about being part of this new project, due to the fact that he was not from Kalaupapa. After patients saw him on his KHON-2 morning segment, “Ask the Doctor,” they knew that Brady was the right doctor for the job.

He seized the opportunity when his friend, a retired Straub pulmonologist who had served on Kalaupapa for 10 years, asked Brady to take over immediately. In a small matter of time, Brady and his hui signed a contract between the Hawai’i State Department of Health and the medical school. The contract is still in effect.

Brady said that he takes care of 16 patients who have been diagnosed with Hansen’s disease, but, in addition, approximately 100 patients there who don’t have the disease are also under his care.

“There are people that take care of the Hansen’s patients, like us, except they don’t take care of their health needs necessarily, and who takes care of them?” Brady said. “Well, we created a clinic for the Kokua of Kalaupapa about five years ago, and once a month, we have clinic for non Hansen’s patients in the Bishop Home, which is basically the convent for the sisters of St. Francis…we tend to their medical needs once a month. Instead, they can see us in Kalaupapa and have their health care needs met.”

He occasionally takes student groups with him on his trips, and sends out invitations for students to join him on trips three to four times a year. These students come from various medical institutions, including the University of Hawai’i John A. Burns School of Medicine (JABSOM) and the University of Hawai’i Office of Public Health Studies. Most of the opportunities that are provided for students include a tour and immersion, but not, for privacy reasons, with the patients.

Dr. Brady values the time he spends with his patients.

“The patients call the medical care that they receive very precious and very confidential,” said Brady, whose patients brought him and his wife along with them to Rome for the canonization ceremonies of Saint Damien in 2009 and Saint Marianne Cope in 2012.

“[The regular trips to Kalaupapa] obviously does cut into a lot of private time, but it’s a commitment I made 10 and a half years ago, and I continue to make that commitment to those patients until the end.”