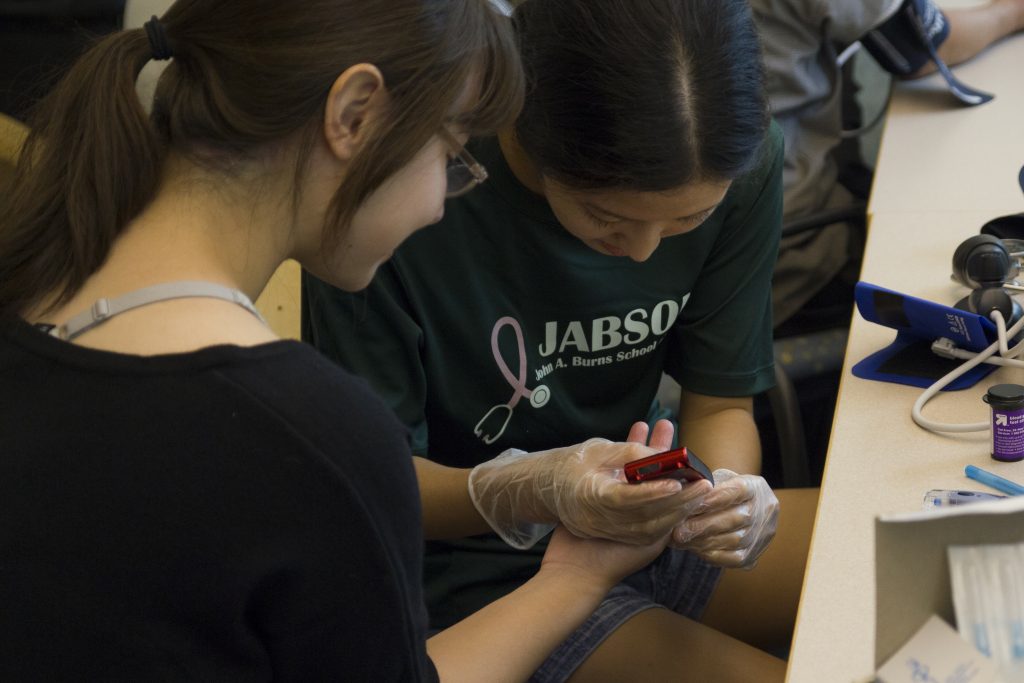 One in ten of every American has diabetes today.
And that translates to 150,000 people here in Hawaii.
Nearly one in two adult Americans have diabetes or pre-diabetes.
Every 21 seconds someone in the U.S. is diagnosed with diabetes . . .
Diabetes has been declared an epidemic.

This is from the sobering opening address, delivered by Dr. Laurie K. S. Tom, for State of Diabetes Hawaii: In the time of COVID-19, Challenges and Solutions Virtual Session. This American Diabetes Association (ADA) event was presented by The Hawaiian Leadership Board and Director on November 12, in commemoration of National Diabetes Month and World Diabetes Day on November 14.  A JABSOM 1987 alumnus, Dr. Tom is an Endocrinologist and Internal Medicine physician, as well as past National ADA Board of Directors member, past President, and current member of the ADA Hawaii Leadership Board.  She welcomed the virtual audience and gave an overview of the event that afternoon.

As Dr. Tom continued, her message did not become any less alarming: “84 million adults have pre-diabetes. And the number just keeps increasing. 410 thousand people in Hawaii have prediabetes. And 85% of the people who have diabetes don’t know it.”   She went on to say that “Diabetes increases the risk for many other serious complications that we’re familiar with: heart disease, stroke, kidney failure, blindness, and amputation, but our message should be that this does not have to happen. Well-controlled diabetes will lessen the potential for these complications and that is one of our goals.”

The presenters who followed Dr. Tom spoke of ways to lessen the potential for these frightening consequences of diabetes, as well as how the coronavirus pandemic is impacting those with diabetes and pre-diabetes.  The panel of presenters, in which JABSOM was well-represented, also talked about the factors fueling this crisis, both those which, as Dr. Tom said, “we can do something about” such as age, genetics, and ethnicities, as well as “lifestyle factors” which we can control, such as “unhealthy food and physical activity that lead to obesity”.

There are also, Dr. Tom said, “the social determinants of health” such as poverty, inadequate access to healthcare, and limited access to outdoor space and healthy food and medications, which “are playing a role” in the rising numbers of cases of diabetes we are seeing across the country.

Though there have been many innovations in medicine and technology employed in the treatment of diabetes (some which were presented in this event) the best cure, she said, is prevention – an idea that is also echoed by her fellow presenters.

Founding member and past president of the ADA in Hawaii, and former Deputy Director of Health for the State of Hawaii, Dr. Jane Kadohiro, moderated the event. Now semi-retired, Dr. Kadohiro has served on many national and local ADA committees as well as ADA’s National board of Directors.

Dr. Kadohiro introduced each of the three panelists whose presentations followed, including Dr. Alan Parsa, Associate Clinical Professor of Medicine at JABSOM and Medical Director of the Diabetes Program at Queen’s Medical Center, West Oahu. Dr. Parsa, who also serves on the ADA Hawaii Leadership Board and the ADA Compliance Committee, emphasized that fear of leaving the house, so prevalent during this time of COVID, is a major problem for people with diabetes.

“By people not going outdoors,” he said, “being less physically active, staying at home they tend to increase their eating – emotional eating, binge eating,” which is, he said, a problem for those with diabetes, as well as those without it.

Dr. Parsa encourages people to get outside. “If you indulge in something, pay it back. Go for a walk after the dessert or the starchy food.”  He explained that the real damage with eating sweets and starches comes when the sugar sits in the blood for a long time, so he advises people to “walk as much as possible,” wearing a mask and avoiding people while doing so, of course. “It’s ok to be outside and get that physical activity, for the mental state also.”

JABSON alumnus, Dr. Melanie L. Shim who, like Dr. Parsa, grew up on Oahu, agreed with him that “the effect of the lockdown itself has been notable” for people with diabetes.  Dr. Shim is a pediatric endocrinologist with Kaiser Permanente in Hawaii and California. She is also an active member of the ADA, the Juvenile Diabetes Research Foundation, and the American Academy of Pediatrics. She shared her frontline experiences as a pediatric endocrinologist.

“With increased screen time and increased sedentary behavior, the vast majority of my patients (both Type 1 and Type 2) are gaining weight,” said Dr. Shim.

Pre-COVID, both Type 1 and Type 2 diabetes had been on the rise in Children ages 10 – 19, but now those numbers are increasing with the pandemic, Dr. Shim said. She said that “there has been an alarming increase in Type 2 diabetes” in her own pediatric patients.

Dr. Shim said that typically Type 2 diabetes presents late in adolescence, but in the past eight years, their numbers have “increased significantly,” and now they are presenting at a much earlier age. In fact, she has seen an eight year old patient with Type 2 diabetes.

She encourages people to choose foods with fiber, such as brown rice over white rice because those more fibrous starches take longer to breakdown in our systems, and are therefore healthier choices for managing diabetes as well as avoiding it.

JABSOM 1988 alumnus Dr. May M. Okihiro primarily spoke about the rise of diabetes and COVID.  A pediatrician at Waianae Coast Comprehensive Health Center, she is also Director of the HI Initiative for Childhood Obesity Research and Education, and Chair of the Hawaii State Nutrition and Physical Activity Coalition Healthcare Taskforce.

Dr. Okihiro said that she has seen marked weight gain in her patients over the past six to seven months, giving what she called “an extreme example” of a 15 year old patient who, this year, started at a healthy weight in January, then gained 49 pounds by October. The patient told her that since the pandemic hit, he has “no schedule, no structure.”  He is snacking heavily, staying up late, getting less sleep, doing more gaming and more mindless eating, and is more stressed out than ever.  “His family doesn’t want him to go outside,” she said.  “It’s not surprising that we’re seeing more weight gain.”

Another problem, Dr. Okihiro cited has to do with food scarcity in Hawaii. Hawaii currently imports about 85% of our food. “Prior to the pandemic we knew this was really a problem. One in every five to one in every seven Hawaii residents was food insecure,” she said. ‘And we know that it’s definitely worsened since the pandemic set in, especially in rural communities and communities that are economically disadvantaged.”

“Food insecurity is going way up,” she added. In Hawaii, “there are many families, especially since the last federal stimulus funding was wrapped up, who really don’t know where their next meal is coming from.” And so, she said, we see opposite things happening. One, we don’t know where food is coming from, and two, we have obesity.”

She praised the efforts of the many organizations and programs which have distributed “hundreds of thousands of pounds of food in food drives and other events, just on the Westside of Oahu alone.  But those events are not consistent and they don’t always supply families with the food they will actually eat.

“If you live in a house with 12 others, in a two bedroom apartment where the stove only works sometimes, your ability to cook the bok choy or the leek that some boutique farm had too much of, it may be challenging,” she said.

Dr. Okihiro said that studies have shown that food insecure adults are more likely to have diabetes, depression and other mental problems, and hypertension. “Lack of access to healthy foods and the cycle of food deprivation and over-eating is also associated with stress, anxiety, and depression.”

“This is a hard, hard time,” Dr. Okihiro said she tells her patients. She suggests that they take small steps to adapting more healthy habits, such as only drinking soda and juice on the weekends, and keeping a pitcher of water in the refrigerator for drinking during the week. “This pandemic is going to go on for a long time,” she said. “We can start with making small choices now.”

Meagan O’Neill, PA-C, who is a certified Diabetes Care and Education Specialist and Medical Science Liaison with Abbott Diabetes Care (which sponsored this event) spoke at length about a device called the Free Style Libre 2 Flash Glucose Monitoring System, made by Abbott, with real-time alarms for the management of diabetes in patients aged four and older.  This device does not require a finger stick and provides continuous recording of glucose readings day and night.

The event concluded with Lorraine Leslie of the American Diabetes Association suggesting some resources offered on the ADA website, such as the Diabetes Risk Test which is scientifically backed and takes about six minutes to complete, and some other resources found  there such as the “Living with Type 2 Diabetes Program” and “Ask the Experts:.  She also informed the audience about the Hawaii Virtual Step Out Walk” meant to take place on March 27, 2021. Information about this walk can be found on its website.