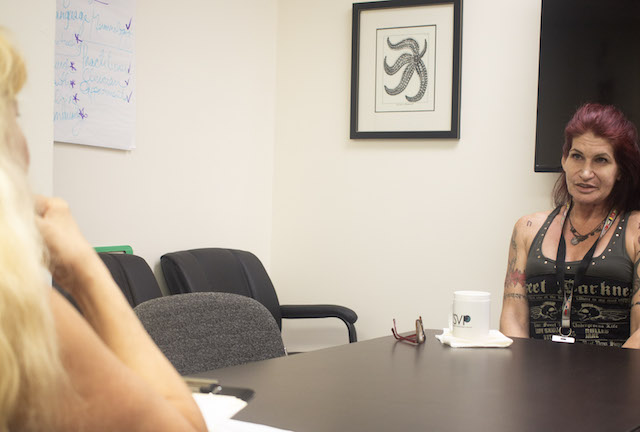 On the second floor of the Gold Bond Building, which is a short elevator ride from UHP Central, you will find the home of an organization that most of us know of as CHOW.  Few of us at UHP know how this very impressive group of care-givers is related to UHP or the scope of the work they do.

CHOW (Community Health Outreach Work to Prevent AIDS Project) is the name of the old non-profit organization that helps people on Oahu who are struggling from substance abuse, homelessness, and mental illness. They also offer support and services to the transgender community. This year, CHOW merged with the Life Foundation, the Pacific’s oldest and largest organization helping those with HIV/AIDS. Together, they now serve their target populations as the Hawaii Health & Harm Reduction Center (H3RC).

As their new name indicates, H3RC employs the harm reduction model. This is an approach which utilizes a range of strategies, including managed use of drugs and alcohol to abstinence, and to reduce the harm that substance abuse causes. Harm reduction practitioners are committed to treating those they serve with compassion, respect, and realistic expectations. Rather than taking the punitive approach that more traditional models have employed, this relatively new model addresses the issue of substance abuse by meeting addicted individuals “where they’re at” and empowering them to help themselves and each other achieve a healthier way of life as well as develop a sense of stability and self-esteem.

But probably the best way to understand the effectiveness of both the harm reduction model and the Hawaii Health & Harm Reduction Center is to listen to Paij Nakamura tell her inspiring story.  Paij describes herself as having been the “lowest level of drug addict,” and emphasizes that if she can recover from that existence “anyone can.” She has come full circle as a Community Health Outreach Worker offering the very services she once received when she was on the street and using heroin.

Paij was like one of the many people we see every day on the streets of Honolulu, one of those people we tend to avoid, someone invisible to most of us as we go about our day to day business.  She was there.

As she readily shares her story, we see a very different kind of individual. Articulate, self-aware, and obviously possessing a generous and caring disposition, Paij is living proof of a life transformed. She speaks at conferences and meets with community leaders and legislators.  She works to help pass bills which will save lives, like the one which would make naloxone, a drug which can reverse overdoses from heroin and painkillers, more readily available to those who use or those who care for people who use opioids, both legally and illegally. But as she speaks of her past, she talks about shooting galleries, deceased friends, being sent to prison, and procuring needles. In fact, it was her need for clean needles which led her to CHOW.

Paij’s association with CHOW began in the early 90s when, as she tells it, a fellow intravenous drug user said, “Hey, I’m going to this place in Chinatown where you can exchange old syringes for new ones.” She went with him, “down steps to a dank little basement” which, at that time, served as the home of CHOW.  She credits this exchange program with saving many lives, referring to its “impact on the number of communicable diseases” it has prevented. But she emphasizes that CHOW (now H3RC) is much much more.

Paij’s path to a healthy and productive life was not a straight line.  She explains that during her “almost 30 years of being wasted,” she had “short periods of recovery” but then would start using drugs again. Through it all, she said, the staff at CHOW never judged her. “No judgement. No judgement. They wouldn’t say, ‘Oh, you’re back again,’ just, ‘Oh, what can I do for you?’”

As Paij went from “being stable, very housed, with a good job” to a point where “things started progressing and going downhill,” CHOW became increasingly important to her survival.   She talks about the times when she credits CHOW with directly saving her life, how a CHOW worker brought her to the ER, how she “got hygiene” from them, how they helped settle domestic disputes, “so many things through the years.” But most important, Paij said, was “the personal connection, the rapport,” that CHOW offered her. “CHOW workers gave me their ear and their time. They treated me with dignity. They didn’t make me feel that I was less than, like everybody else around.” Here she echoes a very important component of the Harm Reduction Model, as it maintains that an approach that condemns and punishes drug users will often just make for an increase in the self-recrimination and feelings of low-esteem which will cause them to continue on the downward spiral of addiction.

With the help of the people of CHOW, Paij was able to step out of that downward spiral. She said that for years she had wanted to work at CHOW, but had to wait until she was ready, until she was strong enough to be a support to those who were living the life she left behind.  After being sober for two years, she returned to CHOW to show a staff member she calls her mentor and friend how her hard work and steady support had led Paij to health and a chance to fully live her life. Paij went back to school and took an internship at CHOW, then became a volunteer. She is now fully employed by H3RC, delivering services and giving others her ear and her time.

“I’m in the van now,” she says, referring the van that is used for needle exchange, wound care, and other services brought to people on the streets.  “I can’t tell you how what that means to me – to be that person.”

Here at UHP, we have a vision.  It is written clearly on the wall in the reception area of our offices in the Gold Bond Building: Our Vision, the vision of ALOHA – to Attain Lasting Optimal Health for All. Paij and the people she now helps are part of that “All,” all members of the island community that we share. Her transformation is one in which we can take some pride because we at UHP help make this vision, this goal that we share with H3RC, a reality for people like Paij.  In pursuit of this shared goal, UHP administers a grant from the Hawaii Ryan White Part B Program to assist H3RC in its fight against the spread of HIV/AIDS. H3RC is connected to UHP by this grant, as well as the purpose and the work they share with The Clint Spencer Clinic, and our doctors, such as Dr. Tricia Wright, who have given their time and efforts helping those with HIV and the effects of substance abuse; but mostly we are connected by the spirit of ALOHA, and our vision to deliver help and the chance for good health to all.