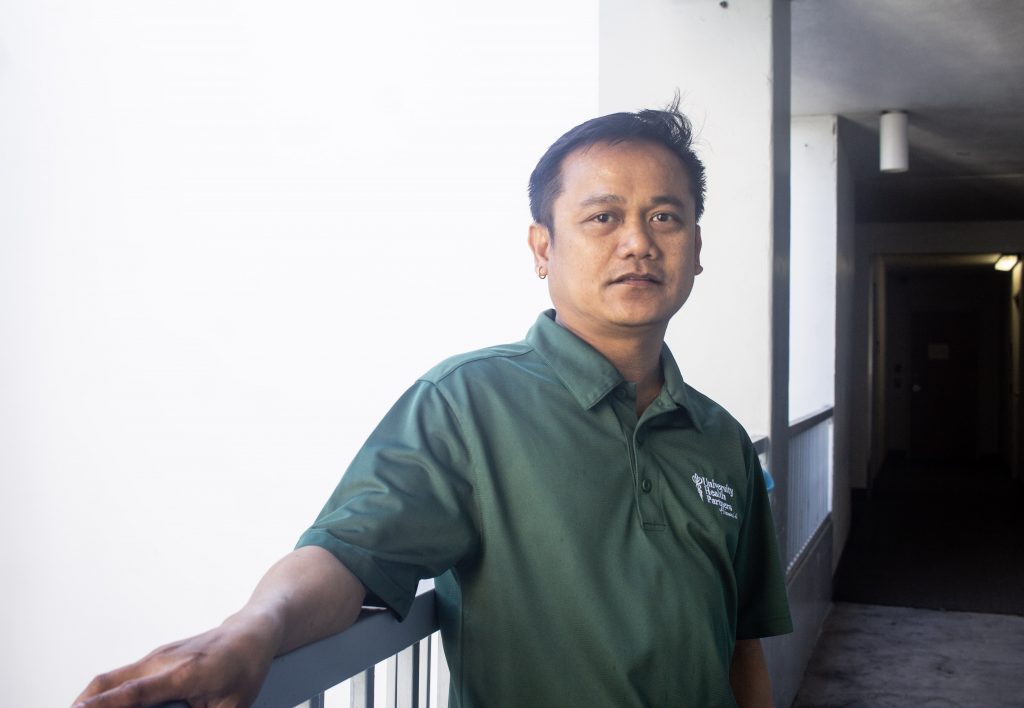 Sometimes we take for granted the good things in our lives.  This happens a lot when it comes to our jobs and co-workers.  It’s easy to get the point where we are so focused on our work that we forget that we have a pretty great group of people here at UHP.  No, we’re not perfect.  Conflicts and disappointments happen, but all in all, we have a spirit here that sets us apart from many other organizations.

Romel Domaoal is here to remind us of that spirit.

Romel is an A/P (Accounts Payable) Accountant at UHP. He makes sure our vendors’ bills and invoices are paid and sent out on time.  During the first week of December, Romel was waiting for the bus on his way to work, when he saw that there was an event across the street at the Bank of Hawaii called “Giving Tuesday.” Among the various booths set up, there was one belonging to the Hawaii Community Foundation.  At their booth, this foundation was asking for donations to help with the work they do in supporting non-profits who benefit our community in such areas as education, the arts, the environment, and health.  Romel filled out a slip with his contact information and dropped it “with a small donation” into a box on the table.  “After that, I didn’t think about it anymore,” he said.

Soon after, he received an email that he thought was spam.  He ignored it for several days, but when he finally did open it, Romel learned that his name was drawn from the box at the Hawaii Community Foundation booth, meaning that he won $1,000 to be donated to the non-profit of his choice.   But the email said that Friday was the deadline for him to respond, and being Friday night, he wasn’t sure if he had replied too late, and said so in his response.  The following Monday, the foundation contacted Romel saying that it wasn’t too late and asking him to choose non-profit organization to receive this $1,000 prize.

“UHP was the first one to come to mind,”  Romel said.  “This was a way I could give back to my employer.”

Generally, people don’t think about giving money to their employers.  Usually, the flow of cash between employer and employee is a one-way street, with the output coming from the employer.  Romel said that there were a couple of reasons why he wanted to give the $1,000 to UHP.  One big one was gratitude.  He talked about how, at one point, he had left us for a similar accounting position at Queen’s Medical Center.  After two weeks at Queen’s, he wanted to come back to UHP, because, he said, he “could work better here.”

Romel contacted our CFO and interim COO, Chip Ellis, who agreed to have Romel back at the same rate of pay and benefit package he was previously getting here.  The day he returned, there happened to be a monthly staff meeting and luncheon where Romel was welcomed back with warmth and lots of good food.

Why, exactly, can Romel work better here? What drew him back to our ohana?  “There is an aloha spirit here,” he said.  “It’s friendlier.”

But “It’s not just gratitude” that made Romel donate the $1000, he said, but that he really believes in our organization, believes in the work we do.  “In my little way,” he explains, “I can help.” How does he hope UHP will utilize his donation?  “Whatever the need is,” he says.

Thank you, Romel.  We appreciate your gift, your gratitude, and your spirit.